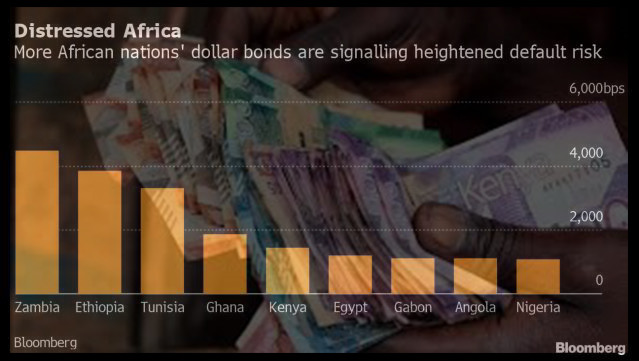 Angolan and Gabonese sovereign bonds are trading at distressed levels, raising the number of emerging-market nations at risk of default to a record.

Each of Angola’s six dollar-denominated government bonds and three from Gabon are trading at more than 1,000 basis points above US Treasuries, a threshold that signals a nation may struggle to repay its debt, according to data compiled by Bloomberg. The sovereign bonds of Nigeria, Kenya and Egypt fell into distressed territory recently.

The widening of the distressed club to include oil-producing states shows how few nations are being spared the concern that’s engulfing the developing world about the risk of a global recession and accelerating inflation. The number of countries in distressed territory has risen to 21 from nine at the end of last year, after Russia’s invasion of Ukraine spooked investors and triggered outflows from emerging markets. Three nations — Russia, Sri Lanka and Belarus — have already defaulted this year and Ukraine is seeking to delay payments on foreign debt.

Angola is gearing for a general election on Aug. 24, the first test of President Joao Lourenco’s popularity since he replaced Jose Eduardo dos Santos at the helm of the resource-rich nation in 2017. While the ruling Popular Movement for the Liberation of Angola, or MPLA, has led Africa’s second-biggest oil producer for almost half a century, this year’s vote is expected to be a tight race against a stronger opposition.

An opinion poll published in May by research company Afrobarometer showed the MPLA had the support of 29% of the 1,200 respondents, while 22% backed the opposition Unita party, which has the support of two smaller groups. Lourenco’s government has embarked on an ambitious reform program under a three-year program with the International Monetary Fund that ended last year. The reforms included the liberalization of Angola’s currency, the kwanza, the privatization of almost 200 state-owned assets and the sale of international bonds.

Unita leader Adalberto Costa Junior has pledged to continue to clamp down on corruption and reduce the role of the state in the Angolan economy if he wins the upcoming vote. He has ruled out the possibility of Angola reneging on its debt obligations.