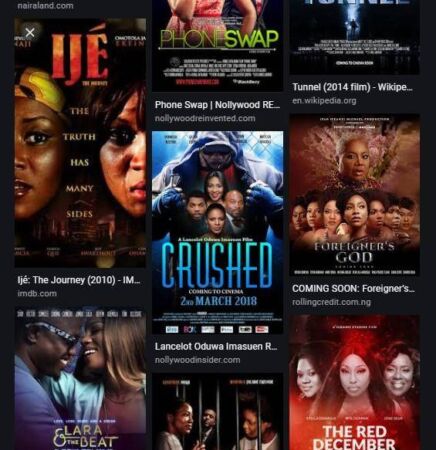 Nollywood’s market share in the cinemas is currently at 25.8 per cent, down from the 39.3 per cent it held in the first half of 2021, the News Agency of Nigeria (NAN) reports. 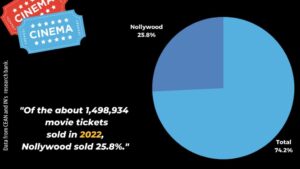 According to data analysed by The Industry by Inside Nollywood, a film data publication, the drop is despite the fact that in both years, total cinema admissions have remained in the same ballpoint of 1. 49 million with 7, 000 more admissions recorded in 2022.

The little increase in total admissions counted in favour of Hollywood titles leaving Nollywood films scrambling for an even smaller percentage of cinema goers.

The 2022 drop is an all-time low despite the stable streak in the last five years.

The journal, which is Nigeria’s first film business publication, noted that in the last couple of years, Nollywood had managed a market share within the threshold of 40 per cent with a large chunk of the remaining 60 per cent held by Hollywood.

Speaking on the data, co-publisher of Inside Nollywood, Anita Eboigbe told NAN that “there are always about 10 Nollywood movies in the cinema, per time.

While some movies such as ‘Omo Ghetto’ have thousands of admissions, others get only about ten people weekly.

Tickets range between N1,200 to N5, 000 depending on the buzz around the movie and the performance weekly.

There have been unicorns of some sort in the two years.

“In 2021, it was Funke Akindele’s ‘Omo Ghetto’ that defied expectations and earned over N636 million in total gross before making it to a streaming platform.

In 2022, Femi Adebayo’s ‘King of Thieves’, ushered a new movement and made over N300 million in total cinema gross.

Eboigbe noted that the decline in market share by Nollywood calls for some introspection and stakeholders are constantly debating several possibilities but the over dependence of filmmakers on streaming have conditioned the audience as well as the laziness of exhibitors in growing the cinema culture.