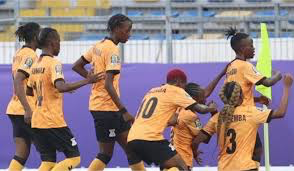 Abuja, July 14, 2022 Zambia beat Senegal in a penalty kicks shootout on Wednesday in Casablanca to reach the semi-finals of the 2022 Women’s Africa Cup of Nations (WAFCON) in Morocco.

The Copper Queens made history when they secured their first FIFA World Cup berth and their first semi-final place in the continental competition after seeing off Senegal in a tight contest.

The Southern Africans sailed through on 4-2 in the shootout at the Complexe Sportif Mohamed V after a 1-1 stalemate following extra-time.

The Teranga Lionesses broke the deadlock just after the hour mark through Nguenar Ndiaye who was unmarked inside the penalty box when she received the ball.

The Zambians drew level in the 70th minute after Avell Chitundu scored from close range.

Both sides then failed to find the target, resulting in the shootout.

Zambia demonstrated their desire to win the match.

This is as coach Bruce Mwape made no changes to the impressive starting team that beat Togo in the last group game four days ago.

Senegal’s coach Mame Moussa Cissé made a couple of changes to the team that lost narrowly to host country Morocco in their last group game.

Mareme Babou, Anta Dembele, Ndeye Awa Diakhate and Nguenar Ndiaye were brought into the starting list for the Teranga Lionesses.

And Ndiaye responded to the faith shown in her by the coach when she opened the scoring in the 61st minute when she evaded her markers to fire home.

The Cooper Queens responded moments later as Chitundu pounced on a mistake by Senegalese goalkeeper Tenning Sene after the latter failed to deal with a freekick by Lushomo Mweemba.

The Zambians came close to getting another goal when Xiomara Mapepa fluffed a glorious chance after being put on by skipper Grace Chanda, with goalkeeper Sene producing an outstanding save.

The extra-time was closely contested with both teams failing to find the back of the net.

On the Senegalese side, only Mama Diop and Haby Baldé managed to convert their attempts.

Zambia in addition to qualifying for the semi-finals of WAFCON, the ticket for the 2023 World Cup which will take place in Australia and New Zealand has also been secured.