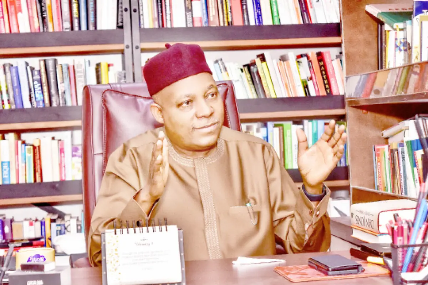 he Northcentral and Northwest regions of the country are disappointed that the All Progressives Congress (APC) presidential candidate, Asiwaju Bola Ahmed Tinubu, picked former Governor of Borno State, Kashim Shettima, from the Northeast as his running mate.

A Senior Special Assistant to President Muhammadu Buhari on Special Intervention, Ismael Ahmed, said this on Wednesday while speaking on Sunrise Daily, a Channels Television programme.

Tinubu had at the weekend picked Shettima as his vice presidential candidate after weeks of consultations.

His choice of the serving senator had been greeted with mixed reactions with the Christian community in Nigeria condemning the Lagos State politician for picking a Muslim running mate.

But Ahmed, who is not concerned with the religion of the candidates, said the Northwest and Northcentral were hoping to get the vice presidential slot, adding that the regions had contributed more votes to the APC than any other region in the country.

“I just came back from Kano yesterday and I know that there are a lot of people who are miffed [for not getting the Vice Presidential slot].

“For example, the Northwest which has the largest voting population of about 20 million upward, six out of the seven governors are members of the APC, five of which are in their second term, none of which contested against the presidential candidate at the convention. The only person, the Jigawa State governor, that bought a form dropped at the last minute and they thought they would pick him.

“A lot of people, rank and file within the party, thought the Northwest could have been considered.

“Some people thought that Northcentral had not had a presidential or vice-presidential candidate in a democratic setting. Even though they have a larger voting population more than the Northeast, they were not considered,” the former senatorial aspirant said.

Ahmed, a former youth leader of the APC, acknowledged that there would always be a complaint notwithstanding who is chosen, adding that the decision to pick Shettima was not an easy one for Tinubu.

He said less emphasis should be placed on the religion of candidates, saying “when Bola Ahmed Tinubu was elected as the presidential candidate at the Eagle Square, I am not sure religion was considered.

“I think he was nominated because of how much work and investment he has put in the political and democratic structure in the last 30 years that gave him that edge over his co-contestants not because he is a Muslim.”

He insisted that Tinubu’s choice of Shettima was based on his pedigree and political prowess not mainly because he is a Muslim.