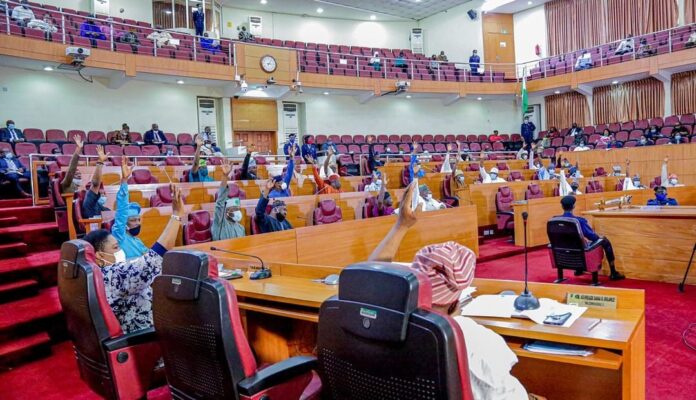 The Lagos House of Assembly had denied unfounded report that it had secretly passed a Sharia Bill to get Northerners support for the APC Presidential Candidate, Sen. Bola Tinubu.
The Chairman, House Committee on Information, Security and Strategy, Mr Setonji David, made this known in a statement on Wednesday.

The News Agency of Nigeria (NAN) recalls that an online medi had reported that the assembly hurriedly passed a bill to set up Sharia courts, paving way for Sharia law in Lagos state which had been signed into law by the current state governor.

David, representing Badagry II, said the report was a mere figment of the imagination of the writer and a total lie from the pit of hell.
The spokesperson said no informed person should believe such lies against the assembly that was above the common standard of excellence, adding that the news was far from the reality.

He said: “The attention of the Lagos state house of assembly has been drawn to a malicious and unfounded report making the rounds on social media.
” That the assembly has secretly passed a sharia law in a deal to get Northern support for Tinubu, the APC presidential candidates.
“We will not have dignified the writer of this hate speech but in order to set the records straight, this is a mere figment of the imagination of the writer and a total lie from the pit of hell.
“No informed person should believe this lie against the assembly that is above the common standard of excellence. The news is far from reality.
“Some people are just mischievous. Spreading all sorts of untrue stuff. Is it possible to pass a law under cover?
“The process of law making is universal and very open. You cannot pass a law without subjecting it to public hearing in Lagos state.”

David urged residents of the state and Nigerians as a whole to take the peddlers of this unfounded report as uninformed, and uneducated people who needed to be schooled about the law making process.
He said Tinubu was a fast selling product across the country and does not need any law from the state to further endear him to all Nigerians.
The lawmaker said by the special grace of God, Tinubu would emerge winner of the 2023 presidential election to the shame of purveyors of the hate news.