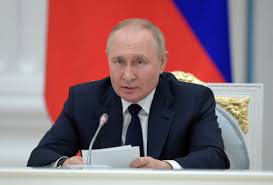 Russian President Vladimir Putin has signed a decree extending a simplified Russian naturalisation process to all citizens of Ukraine, a document published on the Kremlin’s website shows.

The decree orders that “all citizens of Ukraine” be given “the right to apply for admission to the citizenship of the Russian Federation in a simplified manner”.

Previously, only residents of the self-proclaimed breakaway territories of the Donetsk People’s Republic (DPR) and Luhansk People’s Republic (LPR) in eastern Ukraine, as well as those in the Russian-occupied southern Zaporizhzhia and Kherson regions, were eligible for the simplified procedure.