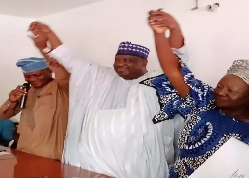 Aggrieved stakeholders of the Peoples Democratic Party (PDP) in Plateau State have rejected the choice of Mrs Josephine Piyo as running mate to the governorship candidate of the party, Barr Caleb Mutfwang.

They said the choice of Josephine as running mate was the wrong one and would spell doom for the party in the general elections.

They made their grievances known in a petition addressed to the national chairman of the party, Senator Iyorchia Ayu.

They argued that, as an opposition party, there is every need to ensure that “our candidates are not just popular and best, but very popular and acceptable to all the political blocks within the party.”

They further alleged that both the governorship candidate and the running mate were nominated from the camp of a former governor of the state, Jonah Jang, while the faction of Senator Jeremiah Husseini was not allowed to pick the running mate as earlier agreed during the reconciliation process.

“If her choice is allowed to stand, it means Senator Jang has jettisoned the reconciliation agreement and everyone will go back to the trenches and that would not augur well for the party in the secondary election,” the aggrieved stakeholders said.