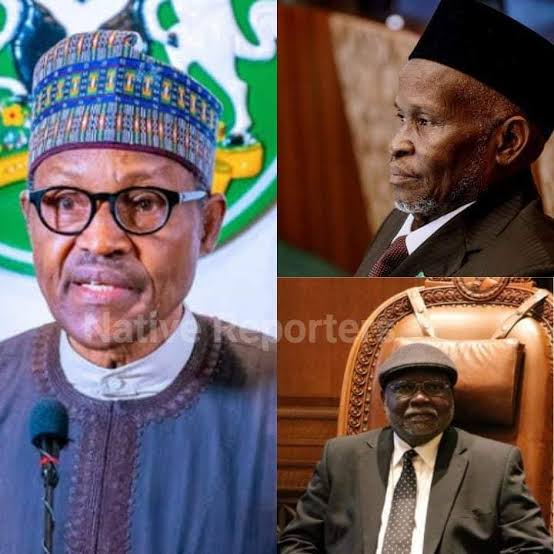 The recent voluntary resignation of the former Chief Justice of Nigeria (CJN), Mohammed Tanko is among the top issues that swarmed the public media space and still continued to gather mixed reactions from different quotas of the country.

The development comes amid the corruption allegations some Supreme Court judges levelled against him.

According to the resignation letter he tendered, Tanko sighted health issues as the reason behind the arrival at this difficult decision, which compelled him to terminate his judicial career before attaining retirement period.

In a protest memo signed by 14 Supreme Court judges, Muhammad was accused of not giving justices their legitimate entitlements.

Well, the former CJN has said his reason, however, an in-depth report which was made available by the national dailies including Daily Trust, revealed that Tanko was forced to resign after he was served with an already prepared resignation letter. In addition, the sources also added that, the ex-CJN was not given opportunity to consult any of his family members prior to signing the documents that axed him out of service.

Prior to this development, a lot of dust has been emanating from the country’s judiciary system, especially the judges where they have been complaining for lack of adequate salary and welfare services to care for themselves. There were some instances where they pinned the blame on the ex-CJN Tanko for their continued sufferings.

Therefore, this recent event is ultimately not unconnected to the aforementioned allegation when the issue is scratched beyond the surface. Still, this incident occurred sometime after the leakage of an enclosed secret memo written to his lordship, by his fourteen learned brothers’ justices of the Supreme Court, led by the present acting CJN of the federation, Olukayode Ariwoola.

The memo which was said to be leaked to the press by an unknown party was carrying both the allegations made to the immediate CJN accusing him of dereliction of duty, misappropriation of resources and misuse of power.

Again, it was also learnt there was a memo from the judges to the presidency, highlighting all of the CJN’s financial dealings, and stating that they would stop sitting from September if he is not removed.

Nonetheless, the immediate past CJN has denied all the allegations labelled against him by his learned brother justices.

Even though President Muhammadu Buhari has eulogized Tanko, commended him for such kind of patriotic action and altruism to the extent that he conferred him with the country’s highest title of honour, i.e. the Grand Commander of the Order of Niger (GCON), however, there is still call for his (Tanko) probe across section of the country.

It can be recalled that Tanko was sworn as the substantive CJN and assumed duty on Thursday, July 11, 2019 after his nomination by Mr. Buhari. This happened after the erstwhile CJN, Honorable Justice Walter Samuel Nkanu Onnogen was ousted after being accused of fraud which ultimately paved the way for Tanko to the leadership of the apex court.

The Senate has hinted that it will continue its investigation of the corruption allegations against the former CJN as raised by his colleagues in spite of his voluntary resignation.

Therefore, its committee on Judiciary, Human Rights and Legal Matters, will meet with relevant stakeholders to “address the complaints raised by the justices of the Supreme Court as part of the resolutions taken at plenary on Tuesday, June 28 after lawmakers considered a mini report of the judiciary committee.

Nonetheless, corruption and other sorts of misappropriation have since become rife in Nigeria’s judiciary system. This is so disheartening that cases of illegalities are found in the justice department, where the common citizens find trustworthy and even rely on to provide justice for them. It is unfortunate that these kinds of ugly trends keep on recurring.

The growing culture of corruption has almost become a way of life and this will have more fundamental negative effects on the judiciary as the bastion of hope for the common man. It might be reasonably expected that countries with higher perceived overall corruption would also have higher perceived judicial corruption and vice versa.

Yet, the existence of corruption in the other arms of government is also one of the causes. There is documented evidence of executive and legislative corruption in Nigeria In addition, underfunding of the judiciary has also been attributed to corruption. The judiciary has been deliberately underfunded and makes it go cap in hand for funds, particularly for capital expenditure and this has been described as official corruption. It appears that an underfunded and financially malnourished judiciary can only breed official corruption in the judiciary. Underfunding also undermines the independence of the judiciary, ultimately portends a great danger to the dispensation of justice and to the polity where democratic consolidation is at risk.

Also, Influence and pressure of politicians, paramount rulers and top businessmen are part of the major causes of judicial corruption. These categories of people usually employ every available socio-economic and political means at their disposal to induce highly placed judicial officers to dance to their tunes, thereby wooing them to hamper the course of justice delivery in the country. The greatest challenge to the judiciary is the pressure from the politicians, businessmen and traditional rulers. It is this class of persons that bribe, intimidate, harass or influence judges to depart from their sacred oath of office and the path of honor and rectitude.

Non-punishment of corrupt judges is another reason why the problem is becoming persistent. Because, there are several unproven cases of judicial corruption which are either under investigation or have not been disputed by those involved.

Also Justice Abubakar Talba Perceived Bribery in a corruption case in 2013 but just left off the hook with a warning and was suspended for 12 months. Similarly, Justice Charles Archibong who was charged with professional Misconduct and incompetence tainted with complicity and corruption, went on a retirement also in 2013 as well. This is just a tip of an iceberg concerning the history of corruption incidents in Nigeria judiciary.

Remember that, a corrupt judge is more harmful to the society than a man who runs amok with a dagger in a crowded street. The latter as you know can be restrained physically. But the former deliberately destroys the moral foundation of society and causes incalculable distress to individuals while still answering ‘honorable’.

I wish to recommend that proper reforms in terms of appointing fit and proper persons to the bench and jury panel should be adopted in the high courts’ proceedings to curb judicial corruption on Nigeria’s surface which will consolidate democracy and ultimately pave the way for sustainable development.

Meanwhile, Justice Ariwoola, who has now taken over the mantle of leadership at the Supreme Court has his job cut out for him.

The first thing is to rebuild morale within the judiciary, starting from the apex court. The next issue is to dispel the clouds left behind by his predecessor with regard to funds management and welfare. Thirdly, he should do everything feasible to ensure that he raises the profile and integrity of the judiciary. He has the lessons of history behind him, and the experience of his two immediate predecessors and their circumstances.

Thus, Nigerians will be eagerly anticipating to see what he has to offer to the table in reformation of the justice system in the country.