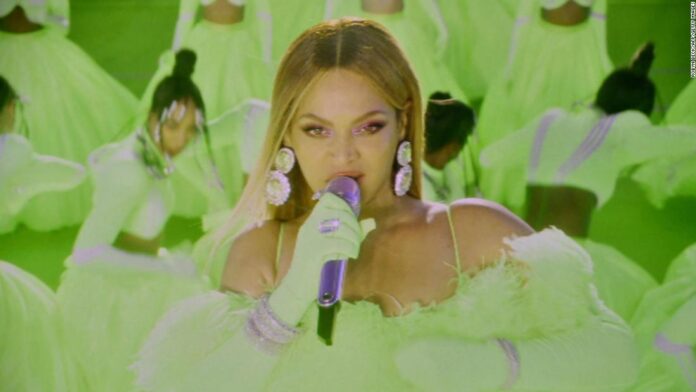 The Great Resignation is part of the zeitgeist. If you need proof, just ask Beyonce.

The superstar singer’s new single, “Break My Soul,” which was released Monday night, taps into the worker malaise that has helped lead to a record number of Americans quitting their jobs. It’s the first song from her seventh studio album, Renaissance, set to drop on July 29.

Beyonce’s ode to leaving your job is the latest cultural reference to the Great Resignation labor trend that began in spring 2021, around the time the U.S. economy was reopening more broadly after its pandemic-era lull.

Since then, Americans have used social media site TikTok to quit their jobs publicly, in so-called “Quit-Toks.” In a popular Reddit forum, users have shared stories about quitting and resignation text messages to bosses.

“It’s been interesting the extent to which the phenomenon has seeped into the zeitgeist,” Nick Bunker, an economist at job site Indeed, said of the Great Resignation.

Beyonce’s track “is one instance of a broader public awareness or discussion about people quitting their jobs, which is reflective of what’s happening in the labor market and society,” Bunker said.

‘Beyonce wants us to quit our jobs’

“Break My Soul” ranked No. 1 on the iTunes Top 100 songs chart on Tuesday, according to PopVortex.

In the song’s first verse, Queen Bey riffs on employee burnout over a driving house beat:

“And I just quit my job / I’m gonna find new drive / Damn they work me so damn hard / Work by nine / Then off past five / And they work my nerves / That’s why I cannot sleep at night.”

Shortly after, Beyonce uses a vocal sample from Big Freedia’s 2014 song “Explode” to reiterate that theme:

The ‘Great Resignation’ is global – and it’s shaken the labor market for good
Many fans called out allusions to the Great Resignation on social media Tuesday. “An hour into the work day and I see why Beyonce told me to quit my job,” one wrote on Twitter. “Beyonce telling me to quit my full time job and become a full time streamer and like … I might … just do it …??” another tweeted.

Fiverr, which offers services to freelancers, used the song as a launch pad for marketing, tweeting: “Beyonce wants us to quit our jobs and make a living on our own terms. You heard the woman.”

The torrid pace continued into 2022. More than 4.4 million people quit in March, a monthly record; a similar number did so in April, the latest month for which federal data is available.

Anthony Klotz, the University College London School of Management associate professor who coined the trend’s nickname when he taught at Texas A&M University, recently cited widespread burnout among workers as one of four pandemic-related factors driving elevated levels of quitting.

More time at home gave workers an opportunity to reevaluate their priorities and values, and employees are reluctant to give up remote work.

The overarching story of the last two years is more [one] of workers finding more opportunities and seizing them rather than due to burnout and abandoning work at large.

Pay does seem to play a role for many workers — and some economists think it’s a key driver.

Hourly wages jumped by 6.1% in May relative to a year earlier, the biggest annual increase in at least 25 years, according to the Federal Reserve Bank of Atlanta.

The dynamic results from record levels of demand for workers, which has pushed businesses to compete for scarce talent by raising pay, especially in certain industries such as leisure and hospitality (bars, restaurants, hotels) and retail.

Employees expect more from their lives and work after Covid, says Harvard’s Gulati
Job openings are near all-time highs; workers have capitalized on that availability to quit their current roles and take new, higher-paying gigs, Bunker said.

“The overarching story of the last two years is more [one] of workers finding more opportunities and seizing them rather than due to burnout and abandoning work at large,” Bunker said.

In the past, burned-out workers may not have felt they had the power to quit a job and readily find a new one, he added.

Low pay and a lack of opportunity for advancement tied as the primary motivations for workers to leave a job in 2021, followed by feeling disrespected at work, according to Pew Research Center.

How a cooling job market may affect resignations

Whatever the reason, the wave of resignations seems to be fueling stress and dissatisfaction among remaining staff members — which may, in turn, contribute to more resignations, especially if labor market conditions remain favorable for workers.

More than half (52%) of employees who chose to stay after a colleague’s exit reported taking on more work and responsibilities, according to a Society for Human Resource Management survey.

Nearly a third of them struggle to get necessary work done, 27% feel less loyalty to their organization, 28% feel more lonely or isolated, and 55% wonder if their pay is high enough, according to the survey, published in October.

Of course, there are indications the job market may cool down this year — and, possibly with it, the Great Resignation trend.

For one, the Federal Reserve is raising borrowing costs for consumers and businesses in a bid to slow the economy and tame high inflation, which has been eroding the average consumers’ purchasing power despite higher wages. The U.S. central bank is forecasting a slight increase in unemployment as a result of its policy.