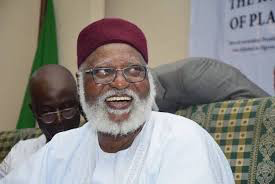 The governors made the remarks in a message issued by their Chairman and Governor of Plateau, Simon Lalong, on the occasion of the retired general’s 80th birthday.

Naija247news reports that the message was conveyed by Lalong’s Spokesperson, Dr Makut Macham, on Monday in Jos.

The forum, which noted that Abubakar served the nation actively in the military, rising to become the head of state, said that he was an epitome of integrity, patriotism, fairness and justice.

It also acknowledged the pivotal roles played by the former head of state in the democratic process by handing over to a civilian administration in 1999.

“Gen. Abdulsalami Abubakar has remained a strong advocate for the consolidation of democracy, accountability and good governance.

“This is through his engagements under the National Peace Committee, where he continues to interact with stakeholders and pursue democratic ideals.

“The northern governors’ forum has benefited from his fatherly role and wise counsel in addressing the challenges of the nation and those of the region.

“The forum wishes him many more years of good health, God’s grace and protection, and urges him to continue to avail the nation and the northern region of his reservoir of knowledge and experience.