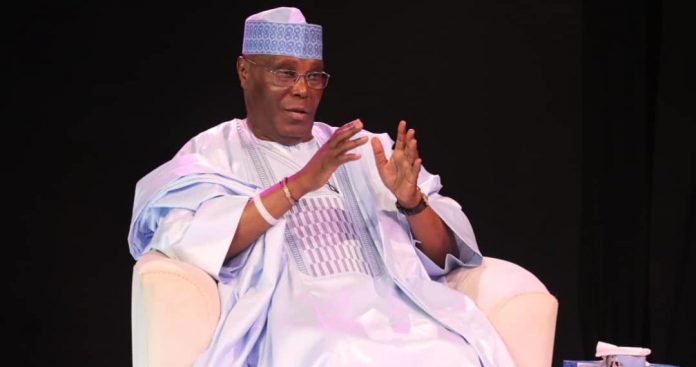 Abuja, June 13, 2022 (NAN) A political youth group has called on the Presidential Candidate of the Peoples Democratic Party (PDP), Alhaji Atiku Abubakar, to intervene in the internal crisis threatening the Kano State chapter of the party.

The group, PDP Youth in Action, made the appeal in a letter jointly signed by its leaders across the 44 local government areas of Kano State, addressed to the PDP National Chairman, Sen. Iyorchia Ayu, in Abuja.

The acknowledged copy of the letter that was also copied to the PDP Vice National Chairman, Northwest, and the INEC, was made available to the News Agency of Nigeria on Monday in Abuja.

Some of the leaders include Messrs Yusif Sale of Ajingi, Umar Sehu of Albasu, Saminu Maikudi of Rogo, Abubakar Sani of Rimingado and Kabiru Dala Local Government Areas, respectively.

The youths said it was important for Abubakar to intervene to resolve the crisis within party before it would affect its fortune and his chances in 2023.

The youths said that Kano, being the most populated state in the country, had became centre of attraction by political gladiators, but the crisis within PDP had not allowed it to take advantage of the state.

The group noted that for quite a long time, the PDP had found itself within the range of the crossfire of political big wig’s selfish interests and ego culminating into the present woes bedeviling the progress of the party in the state.

The group said that the factional candidates circulating their pose with Abubakar with each side claiming his endorsement, had thrown PDP members into confusion, brought the party to its knee and threatening the fortunes of the party in the state.

They said that until and unless something was urgently done to address the problem, the party would suffer a serious setback in the state.

They said that was sadly when most part of the country was rooting for PDP as a solution.

They recalled that PDP in Kano state held two parallel congresses with one conducted by Shehu Wada Sagagi, a person said to be the Chairman of the PDP in the state and recognised by a law Court that produced Muhammad Abacha.

They added that the other congress was conducted by a faction of Amb. Aminu Wali, a former Minister of Foreign Affairs, conducted by the electoral committee sent to conduct the congress from the national headquarters that produced Sadiq Wali as flag bearer.

“This development offends the Electoral Act 2022, PDP Constitution as well as the PDP guidelines and is a recipe to disaster on the party’s fortune in the event of continued litigation arising therefrom because each side is now battling for recognition.”

The youth also recalled with concern that on May 29, the opposing candidates of the PDP circulated their pose with Abubakar with each side claiming his endorsement.

The dichotomy, according to the youths, which is fondly referred to by opponents as PDP Kwankwasiyya and PDP Gandujiyya factions, was weakening the party strength of the party in the state.

The youths said that while they were not taking side with any of the warring factions, it believed that the parallel congresses held in Kano state was something that no political party would hope to witness under the present Electoral Act.

“Another development is the recent court judgment nullifying the delegates recognised by the party.

“This, the PDP family believe, is the handwork of enemies of the party and has also pose dangers to the party even after general election during the post-election matters.”

The group said that the major problem encountered by PDP was the recognition of the Sagagi-led faction in Kano state by the Federal High Court, Abuja, following a suit filed by the National Working Committee (NWC), which was suspected to be orchestrated by a mole.

“This development gave legitimacy to the claim of Sagagi based on the implication of the PDP constitution.

“As it stands today, we have no tentative gubernatorial candidate in Kano state as a result of the dual congress all of which have semblance of legitimacy and illegality.

“Your Excellency Sir, as it stands today we don’t have a senatorial aspirant of Kano South and some other legislative positions.

“But have nine aspirants for the governorship seat apparently not necessary to win election but serve as a conduit pipe for campaign funds.

The group said that their findings also suggested that most of the gubernatorial aspirants when asked to take other positions to reduce the crises in the party rejected the offer outrightly, even when they know the party cannot perform in their areas.

“What is more worrisome is that the supervising entity, INEC have monitored all the two congresses, which further spell danger to our party.

“Therefore, it is in the interest of the success of our party at all levels more particularly at the federal level that urgent step needs to be taken to salvage the Kano PDP and ensure our victory in the State come 2023.”

The group said that the intervention of Abubakar to solve the quagmire would propel his chances of winning the most populous state without much stress.

The group suggested that to achieve that, as a matter of urgency, the PDP should be made to cancel the two parallel congresses all of whom proved to be defective in law based on the Electoral Act 2022, the PDP Constitution and guidelines for primary election.

They advised that a consensus arrangement be initiated because, going by the court ruling on the delegates, the party could not afford the distraction of ceaseless litigation.

“Therefore, the most viable option is for the presidential candidate to identify the potential acceptable candidate no matter how disadvantaged he is, and ensure that he emerge as the candidate so that he could be a rallying point.

“We suggest that the presidential candidate can sought the consent of all the aspirants in writing to support the consensus candidate as required by the Electoral Act 2022.

“While the affirmation can be done by any person who is currently recognised as the chairman of the party, regardless of what ever is going on, this singular act will put at rest all other crises rocking the party in Kano state.

“Doing so will put the party in the right direction and Kano state will not be left out on the new era of Abubakar factor that is giving hope to the Nigerian people for a possible new Nigeria of our dream.”

The group, while congratulating Abubakar’s emergence as PDP’s presidential candidate, said it was an indication of how Nigerians across board, expressed belief that he would win the 2023 presidential election.

Similarly, the party’s candidates for Governorship, Senatorial, House of Representatives and House of Assembly have also warned the PDP National Working Committee against not submitting their names to INEC for 2023 general elections.

The candidates’ letter to PDP National Chairman, Sen. Iyorchia Ayu through their counsel, Dr J.Y. Musa SAN and Co, was acknowledged by the party’s national headquarters.

The letter, which was titled: “The unavoidable need to allow the results of the primary elections monitored by INEC to prevent a situation where PDP will not field any candidate in Kano for the 2023 general elections.”

The candidates advised PDP to tread carefully or may end up not having any candidate on its platform in the upcoming 2023 general elections in the state.

This according to them may not be risk worth taking considering the strategic position of Kano state in the political equation in Nigeria.

“We are solicitors to the candidates of the PDP elected in the just concluded primary elections conducted in Kano State for Governorship, Senatorial, House of Representatives and House of Assembly.

“We have been informed by our clients that it came to their notice that there were parallel primary elections which were not monitored by INEC and the National Working Committee is pushing to use the list of persons purportedly elected at those primary elections.

“Be informed that INEC has made available to us, on application, the Certified True Copies of the Report of the electoral body confirming that it monitored the primary elections that produced our clients.

“The INEC Report also made it clear that no other primary elections were conducted by the Party for the election of candidates to the various elective positions in Kano state.

“There is a serious danger looming that may thwart the chances of the PDP from fielding candidates for elective positions in Kano state in the 2023 general elections,” the letter alerted.