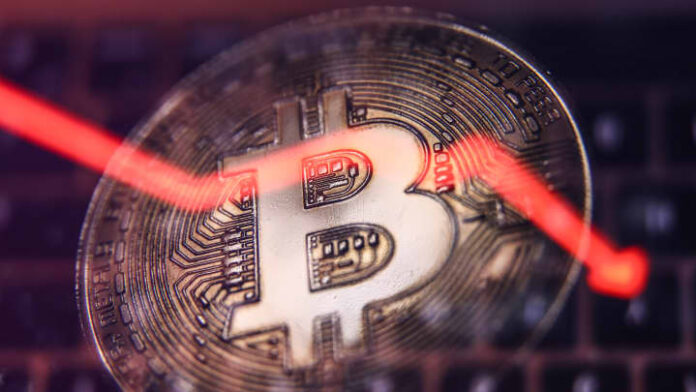 Bitcoin tumbled below $24,000 on Monday, hitting its lowest level since December 2020, as investors dump crypto amid a broader sell-off in risk assets.

Meanwhile, a crypto lending company called Celsius has paused withdrawals for its customers, sparking fears of contagion into the broader market.

The world’s largest cryptocurrency bitcoin dropped below the $24,000 mark, according to CoinDesk data, and traded around $23,575 at 7:45 a.m. on Wall Street.

Macro factors are contributing to the bearishness in the crypto markets, with rampant inflation continuing and the U.S. Federal Reserve expected to hike interest rates this week to control rising prices.

Last week, U.S. indices sold off heavily, with the tech-heavy Nasdaq dropping sharply. Bitcoin and other cryptocurrencies have tended to correlate with stocks and other risk assets. When these indices fall, crypto drops as well.

“Since Nov 2021, sentiment has changed drastically given the Fed rate hikes and inflation management. We’re also potentially looking at a recession given the FED may need to finally tackle the demand side to manage inflation,” Vijay Ayyar, vice president of corporate development and international at crypto exchange Luno, told CNBC.

“All this points to the market not completely having bottomed and unless the Fed is able to take a breather, we’re probably not going to see bullishness return.”

Ayyar noted that in previous bear markets, bitcoin had dropped around 80% from its last record high. Currently, it is down around 63% from its last all-time high which it hit in November.

“We could see much lower bitcoin prices over the next month or two,” Ayyar said.

Celsius ‘adding fuel to the fire’

The crypto market has also been on edge since mid-May when the so-called algorithmic stablecoin terraUSD, or UST, and its sister cryptocurrency luna collapsed.

Now, the market is concerned about a crypto lending company called Celsius which said on Monday that it’s pausing all withdrawals, swap and transfers between accounts “due to extreme market conditions.”

Celsius, which claims to have 1.7 million customers, advertises to its users that they can get a yield of 18% through the platform. Users deposit their crypto with Celsius. That crypto is then loaned out to institutions and other investors. Users then get yield as a result of the revenue Celsius earns.

But the crypto market sell-off has hurt Celsius. The company had $11.8 billion worth of assets as at May 17, down from more than $26 billion in October last year, according to its website.

CEL, which is Celsius’ own coin, is down more than 50% in the last 24 hours, according to CoinGecko. Investors are concerned about broader contagion in the crypto market.

“The Celsius situation is definitely adding fuel to the fire,” Ayyar said.

“Broadly the markets were already under pressure from inflation concerns and the interest rate hikes, but with crypto such contagion events could cause outsized declines, given the market is tightly interlinked these days with a variety of inter-connected protocols and businesses.”