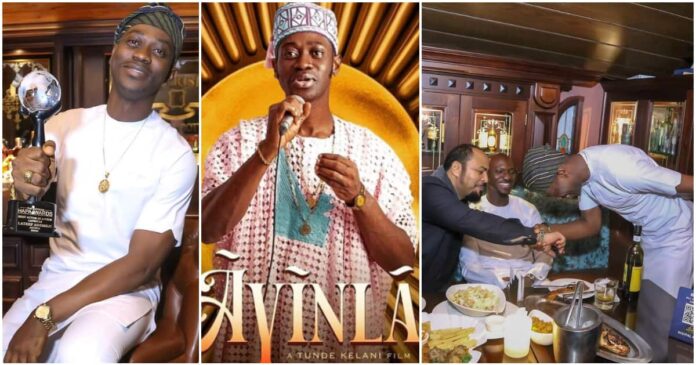 Abuja, June 7, 2022 Popular Nollywood actor, Lateef Adedimeji has bagged an international award in U.S. over the leading role he played in a movie titled ‘Ayinla’.

The renowned actor took to his Instagram page @adedimejilateef to announce and celebrate his achievement.

He said that he won the best actor in Africa for his role in Tunde Kelani’s hit movie ‘Ayinla’, alongside top Nigerian movie stars Etinosa Idemudia and Ramsey Nouah.

“Best Actor in a film! AYINLA! Thank you! I was honored last night at a private dinner with the Founder and Chief Executive Officer/ Executive Producer, Hollywood and African Prestigious Awards, Ms Tina Weisinger.

“With my boss @ramseynouah and beautiful @etinosaofficial in the filming industry as the Best Africa Male Actor from U.S.

Naija247news reports that Adedimeji has added a feather to his cap following the award.

According to him, he has been receiving congratulatory messages from colleagues in the movie industry as well as followers.

Adedimeji for some time now, has been doing an excellent job and showing off his acting prowess, which earned him a significant role in ‘Ayinla’.

Adedimeji is a Nigerian actor and filmmaker, who gained popularity with his first major role in Yewande Adekoya’s 2013 movie titled ‘Kudi Klepto’.

He has acted in more than 100 Nigerian movies since he began acting 15 years ago and currently a brand ambassador for Airtel and Numatville Megacity.

The popular actor was ranked the second highest grossing actor in Nigeria, where he later took to his Instagram page to appreciate movie directors and others for making it possible for him.

Adedimeji had earlier shared the cover page of ‘This Day’ magazine, named alongside other actors, as the Nollywood leading men who have carved a niche for themselves.

The actor’s immense contribution to the growth of the entertainment industry has made him outstanding.

He got married to his colleague and longtime friend actress Adebimpe Oyebade popularly known as Mo Bimpe on Dec. 22, 2021.