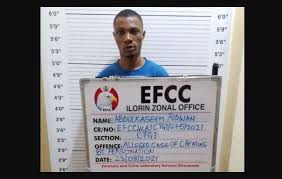 By Olawale Akinremi
Ibadan, June 1, 2022 A Federal High Court in Ibadan on Wednesday sentenced an internet fraudster, Oluwadamilare Ogunleke, to 12 months imprisonment after being found guilty of US$500 internet fraud.

Delivering judgment, Justice Uche Agomoh said that she convicted and sentenced Ogunleke based on the evidence before her and the plea bargain agreement he entered with the Economic and Financial Crimes Commission (EFCC).

Agomoh also said that she considered section 270 (11B) of the Administration of Criminal Justice Act (ACJA) 2015 that spelt out how someone who enters a plea bargain agreement should be sentenced.

“Based on the agreement between the EFCC and the defense counsel, Ogunleke is sentenced to 12 months in prison.

“The custodian sentence starts from the date he was first arrested.

“All the proceeds of crime found in the convict’s possession are forfeited to the Federal Government of Nigeria.

“Upon completion of jail term, Ogunleke shall write and sign an undertaking at the EFCC’s office to be of good behaviour henceforth and never to partake in any form of crime again,” the judge held.

Earlier, Mr Mabas Mabub, the EFCC counsel, Ibadan Zonal Office, told the court that the convict was arraigned on a one-count amended charge bordering on impersonation.

Mabub explained that Ogunleke was apprehended sometime in January after the antigraft body had received intelligence reports from vigilant members of the society about Ogunleke’s nefarious activities.

He added that the convict was found in possession of US$500, an i-phone with which he committed the crime and many incriminating documents printed from his fake email address.

According to the prosecutor, the offence contravens the provisions of section 22(B2) of the Cyber Crime Prohibition and Prevention Act 2015.