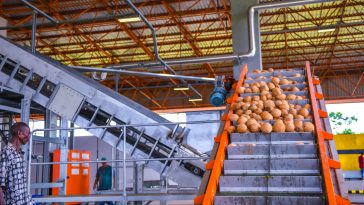 Ememobong stated this after a project tour in Uyo and Mkpat Enin Local Government Areas of the state, on Sunday.

He said government was not a good business manager, noting that two state establishments, Ibom Air and the Ibom Icon Hotel, were privately run and yielding a lot of dividends to the state.
Ememobong added that the governor, being a financial expert, adopted this model, so that the companies would in return, give dividends to government.

He said the process had injected life into the economy of the state, adding that such would be replicated in the newly commissioned coconut refinery.

“There is no fear of how to properly manage those businesses as the governor has shown great example with the way Ibom Airlines is being run.Though owned by the government, it is run like a private enterprise.

“Same thing is applicable to Ibom Icon Hotel. The management and the board are dominated by private business people and every six months, they come to the executive council meeting to give an update on their activities. The state is getting dividends from them,” Ememobong said.

The commissioner further stated that the governor, in an attempt to create jobs for the teeming youths of the state, engaged humans to perform some tasks machines could do in some of the industries.

He noted that the refinery crushed about one million nuts daily.

“With mechanisation introduced to industrialisation, His Excellency consciously designed a human interface into it, some things machines can handle, the governor employed the youth to be doing them, to get them meaningfully engaged.

“The principle of private sector is what we use in running all our endeavours. The level of equity in Ibom Air, is purely government, fully owned by government but run privately.

“We don’t have government interference, unless where very necessary,” he said.

On the perennial flood in some parts of Uyo, the commissioner said previous efforts by the past administrations did not yield expected result, as the water collected was not properly emptied.
“Gov. Emmanuel saw the need to eliminate the challenges of flooding in some parts of Uyo.

“An assessment of the situation showed that the previous efforts in that regard did not achieve the desired results, because the collected water was not properly emptied.

“Most parts of Uyo are very low ground and that is why flooding occurs in some places, when it rains,” Ememobong stated.