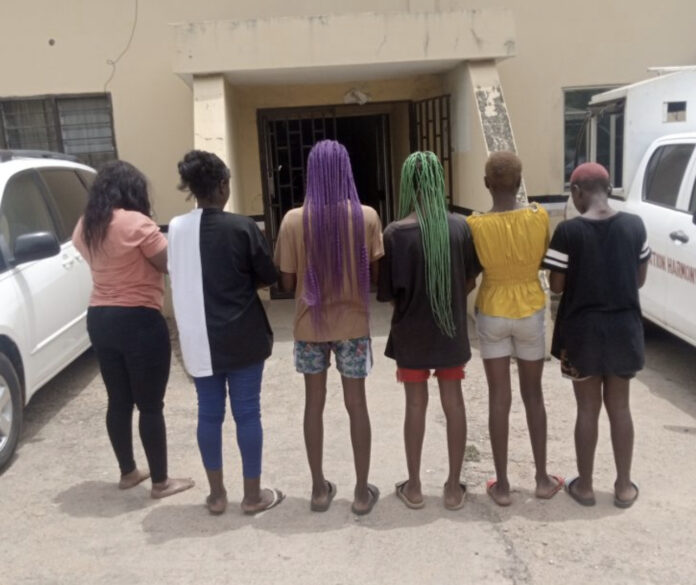 The State Commandant, Makinde Ayinla, said that one of the suspects, Joy Samuel, was arrested on May 11 at a motor park with four girls as they arrived in Ilorin.

Ayinla revealed that the suspect was arrested based on intelligence report on her involvement in child trafficking.

The Commandant said that during interrogation, Joy confessed to have received the girls in Ilorin, to assist her friend who lived in Portharcort and specialised in human trafficking.

He said that investigation conducted revealed that the prime suspect, Gift Rita, would be in Ilorin after few days of the girls’ arrival, to hand them over to male customers.

The commandant said the prime suspect arrived in Ilorin on May 16, at about 10 p. m and was arrested at the car park.

“She was interrogated for her involvement in the case, based on her telephone conversation with the other suspect and confessed to have helped the girls on their request.

“She said that all the girls were living with their boyfriends in Portharcort and were tired of the low life they were living.

“Someone introduced them to the prime suspect and she promised to provide a better opportunity of earning more money than what the local boys gives them,” Ayinla said.

The Commandant advised parents to be attentive to their children, guide them right and be their confidants, saying that parenthood was a big task.

He said the victims were between the ages of 14 and 17 years and would be handed over to National Agency for the Prohibition of Trafficking in Persons (NAPTIP) together with the suspects.

The State Commander of NAPTIP, Saadu Mustapha, said the arrest of the two suspects and the victims was successful due to their collaboration with NSCDC.

Mustapha promised that the Agency would rehabilitate the victims and reunite them with their families, while the suspect would be thoroughly investigated and prosecuted, depending on their level of involvement.

The two suspects confirmed their involvement in child trafficking, while speaking with newsmen

Joy told NAN that she just moved to Ilorin in January, saying that she was a business woman while living in Portharcourt and was into women shoes and bags.

“Business was poor, so I had to look for another means of survival and decided to hustle.

“My friend, Rita, told me about the girls coming and their mission, but I was surprised to see them looking so young and vulnerable, but before I could call Rita, I was arrested by NSCDC,” Joy said.

The prime suspect confirmed all the allegation against her, but said that she was in Ilorin to take them back to Portharcourt, on the request of their boyfriends who insisted in having them back.

“We were living with our brothers in Portharcourt and heard about an opportunity of a cleaning job in Lagos, so we decided to go for it.

“We were later told that we needed to do some shopping and would be staying for few days in Ilorin, but we were arrested on our arrival to Ilorin,” one of the victims said.