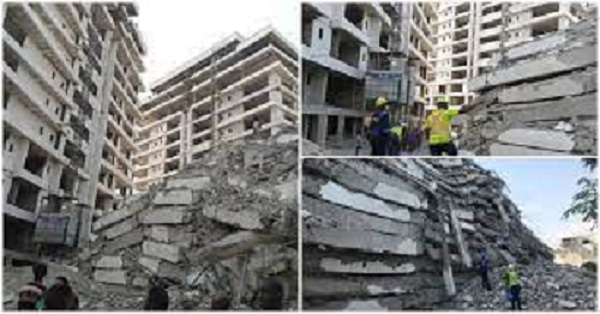 Lagos, May 17, 2022 The Council of Registered Builders of Nigeria (CORBON) on Tuesday told a Coroner’s Inquest into the collapse of the 21-storey building at Gerard Road, Ikoyi, Lagos, that none of its members was involved in the project.

A registered builder, Ahmed Babatunde, made the assertion when being questioned by Mr Akin George, counsel for the state.

Babatunde said that from the project board and all the information gathered, no registered builder was part of the project.

Naija247news reports that Babatunde testified before the Lagos Island Coroner Division, at Court 4, Surulere, unraveling the circumstances that led to the building’s collapse.

During cross-examination by State Counsel, Mr E.O. Akinde, the witness said that based on what was found on the site, there was no evidence that showed speed in the construction of the building.

He said, “The said building could have collapsed as a result of what we call premature loading, shock and vibration.

“Also, we can see from the exhibits B, C and D that some sequence of construction was not followed during the project exhibition.”

Counsel to Prowess Engineering Ltd., O.F.A. Adeosun, while questioning the witness, asked if there was an interaction with the professionals that worked on the site, and the witness answered in the negative.

He also stated that their team did not extract information from the Lagos State Building Control Agency (LASBCA).

Questioning the witness further, Adeosun submitted that if there was no interaction, the witness could not be sure of any building documents and the witness said the documents could be prepared by a registered builder.

“If there are, the names of such builders should be placed on the project board for all to see,” he said.

As a member of the investigative panel, Babatunde said the type of construction adopted was a “wet work construction“.

He explained that a “wet work construction“ is a concrete work which must be given time to gain strength before applying load on it and if it is not given the time needed it would collapse.

The Coroner, Chief Magistrate O.A. Komolafe, adjourned the case until June 21 for continuation of trial.