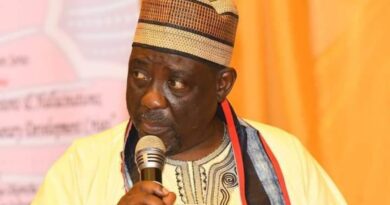 By Moses Kolo
Kaduna, May 15, 2022 Mrs Tinok Nok, 39, daughter of renowned Prof. Andrew Jonathan Nok, has declared her intention to contest the Senatorial seat for Kaduna South on the platform of the New Nigeria People’s Party (NNPP) in the 2023 general elections.

Nok, was also the Commissioner of Health in Kaduna State from 2015 to 2017 before his demise.

Mrs Tinok Nok made the declaration on Sunday while addressing party members at Kwoi in Jaba Local Government area of Kaduna State.

She noted that her intention to contest for the Senatorial seat was not influenced by anyone but purely out of desire to change the tide of Southern Kaduna.

“My aspiration is inspired, not because anybody sent me, but because I am tired of the backwardness of our region and the need to change the tide.

“The people are tired of the status quo and are in dire need for a fresh air and as such, we are determined to bring succor through credible and accountable leadership in Southern Kaduna,” Nok said.

Nok, who holds a Bsc in Microbiology from Ahmadu Bello University Zaria and Msc in Public Health from the University of Worcester, United Kingdom, said she was motivated to impact the lives of ordinary Nigerians.

“The poor state of the nation due to bad leadership in our country is a major force behind my passion to making a difference, not only in the Nigerian society but Africa at large,” she added.

On pet projects executed, Mrs Nok said she held outreaches in schools in the rural parts of the state, aimed at inspiring youths with the “stay in school” programme.

She said she had also reached out to several young ladies who were into commercial sex work by introducing them to various skill acquisition programmes, to help them desist from commercial sex activities and make them better people in the society.

Baba noted that the party’s core mandate was predicated upon delivering the aspirations of the electorate, adding “our party would ensure a representation of leadership that is accountable and accommodating,” Baba added.

“This bold initiative taken has the backing of the party and most importantly, the women folk,” Kajang said.

He urged for sustainability of the campaign spirit, with the affirmation that victory would be achieved at the long run.

The occasion, which witnessed traditional musical performances by various groups, was attended by representatives of traditional and religious leaders, politicians, women and youth groups.