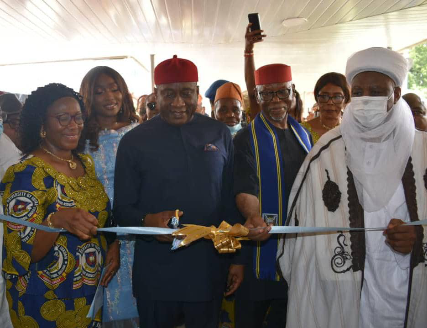 Mr Stanley Olisa, the Media Executive of Air Peace, said in a statement in Lagos on Sunday that the inauguration took place at a special ceremony organised by the UIAA at the University.

Olisa said that the event was attended by the Sultan of Sokoto and Chancellor of the University, His Royal Majesty, Alhaji Muhammad Abubakar and Chief John Odigie-Oyegun, Chairman of the University Governing Council.

Others were Prof. Kayode Adebowale, Vice-chancellor of the University and chief host, and the executive members of the UIAA.

In his remarks, Onyema, while calling for an increased funding for Nigeria’s university system, stressed that Nigerians should be proud of their institutions.

“We need to be proud of Nigerian universities. That’s how it was in the good old days. We need to rediscover those days.

The Air Peace boss, who was recognised with the Alumnus of the Year Award by the University in 2019, used the event to plead with the Academic Staff Union of Universities, (ASUU) to call off their strike for the sake of the nation and the wellbeing of students.

According to him, it pains him that our children have been at home for several months.

“For the sake of our nation, which is passing through trying times, and for the sake of the wellbeing of our children, ASUU should, please, call off the strike.

He said the Federal Government and the Union should reach an amicable decision to end the crisis in the country’s university system.

Explaining how the Airline Operators of Nigeria (AON) suspended its planned shutdown of operations recently, he stated that the operators made sacrifices to give room for the government to solve the issue and it had done that.

He asked ASUU to take a cue from what the airlines did by sacrificing for the wellbeing of Nigerian students.

The airline helmsman also harped on the need for Nigerians to leverage their diversity for national development.

“Nigeria has the potential. Let’s explore this potential. The bigger Nigeria is, the stronger we should be because there’s strength in diversity,” he said.

He implored well-meaning Nigerians to inculcate the culture of giving back to their alma mater and be involved in its development.

Lauding the UIAA President, Prof. Elsie Adewoye, for her hardwork in bringing to fruition the new guest house, Onyema added that people like she should be recognised by Nigerian government.

He challenged her to make good use of the influence of personalities such as the Sultan and Odigie-Oyegun to attract more investments to the University.

In her speech, the President of the Alumni Association, Prof. Adewoye, narrated how Onyema emerged as the Alumnus of the Year in 2019, and donated handsomely to the Ransome Kuti Hall where he stayed during his student days.

She said: “As we commission this N110 million project today, my joy knows no bounds.

Also speaking, the Sultan of Sokoto charged the school management to never let the school down.

“Government cannot do it all. We need to come in and help our universities and that’s why what Allen has done is commendable.

“We’re here to celebrate Allen for this wonderful edifice. Allen, once in a while, come in and see how the guest house is doing.

“Let’s continue to excel and commit ourselves to excellence,” he added.

Similarly, Chief Odigie-Oyegun expressed gladness for the donor and wished him well in his endeavours.

”Allen, we’re glad to have you as an alumnus of UI. May God bless you.

“If we come knocking again, please listen to us as we are already looking at having a new Senate facility.”

He further emphasised that the recurrent crises in Nigeria’s university system must come to an end.

In the same vein, the Vice-chancellor, Prof. Adebowale, noted that the event was significant in many ways.

“Today’s event is significant and outstanding in many ways. A testimony to the generous heart of Allen Onyema.

“We stand here today to commission a N110 million building by a worthy alumnus of this institution. No condition makes a true giver unable to give.

“Barrister onyema has proven this. Even with the harsh realities of the economy, he has been generous.Today, we are witnesses to his generosity”, he stated.

Thanking Onyema for being so outstanding, Adebowale cited how he deployed his aircraft to rescue stranded Nigerians from South Africa in 2019 amidst the xenophobic onslaught.

He recalled how he also offered his aircraft to fly Nigerians a couple of months back from different European countries, as the Russia-Ukraine war thickened.

He also called on Onyema to consider setting up a Centre for Aviation Studies in UI.

The immediate past president of the UIAA, Dr Kemi Emina, also commended Onyema for his consistent support and cooperation.

He described the Air Peace boss as a proud alumnus of the University of Ibadan where he bagged an LLB Degree and has never ceased to identify with the initiatives and activities of the institution, especially through funding of specific projects.

He said the newly commissioned building, named ‘Allen Onyema Edifice’, is a modern multiple rooms guest house at the heart of the University.