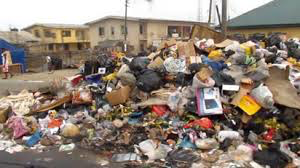 By Ehigimetor Igbaugba
Calabar, May 12, 2022 Some residents of Calabar have expressed worries over the heaps of refuse that have taken over major roads and streets in Calabar, the Cross River capital.

A cross section of the residents, who spoke with newsmen on Thursday, said that the situation had become an embarrassment to them.

They noted that for some time now, the waste managers responsible for clearing the refuse had not been alive to their responsibilities.

The residents said that indiscriminate dumping of refuse had posed serious health challenges to those living in the state capital and called on relevant government agencies to act fast.

They particularly expressed concern that Calabar, hitherto adjudged as the cleanest city in the country, had now become an eyesore.

A resident, Anthony Ididion, said that the heaps of refuse that now adorned major roads and streets in Calabar were defacing the otherwise beautiful city.

He blamed the situation on none payment of salaries of the waste managers by government.

“It is a very worrisome situation that government has not intervened.

“They (waste managers) have protested not once, but twice and yet, the issue has yet to be resolved,’’ he said.

Another resident, Mr Ellah Pius said: “Things have really
deteriorated. Calabar is no longer what it used to be.

“We have lost our sense of cleanliness that we were known for; our streets are now littered with debris, with bad odour oozing out everywhere.

“People are not happy and we are appealing to government to do something about it,’’ he said.

Pius called for proper refuse disposal to prevent refuse from littering the streets within the metropolis.

In his response, Chief Press Secretary to the Governor, Christian Ita, however, assured that the heaps of refuse would be cleared in a matter of days.

He attributed the situation to issues between the state government and the contractors were responsible for clearing the refuse.

“We had issues with the contractors and it is been sorted out.

“We have governed this state for about seven years and there has been nothing like this before.

“We will sort out the issue; we are carrying out some interventions in certain critical areas,’’ he said.