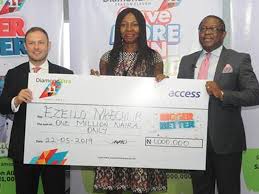 Giles said that 62 millionaires with other consolation prizes and digital marketing classes for 10,000 DiamondXtra customers would be rewarded in this Season 14.

He said the promo would provide new and existing customers with the unique opportunity to win fantastic cash prizes within a specific period.

Giles said the Season 14 promo was designed from a survey conducted on customers to know the changes they needed to see.

He said the promo would feature its recurring salary for life, business grant, education grant and different cash prize categories from its monthly and quarterly draws.

“The DiamondXtra reward scheme is one of the ways the bank creates value and meets the needs of its loyal customers.

“With the launch of this new season, the reward scheme has been revitalised and reloaded to create more winners,” Giles said.

He said DiamondXtra was one of the most successful deposit products in the country that encourages customers to save their money, gain interest on their savings and rewards them as they keep saving.

Giles said that DiamondXtra introduced in July 2008 had impacted the lives of its loyal customers.

He noted that over 24,000 customers have been rewarded with more than N6 billion since the inception of the promo.

“We have given out education grants, business grants and Salary for life.

“The launch of DiamondXtra Season 14 is our best yet; and that’s because it is yours. From the very beginning, DiamondXtra was designed by our customers themselves,” he said.

According to him, the bank will reward 359 customers in the four zones for the outdoor draws.

Umeh said the bank had impacted many families since the inception of the promo.

She said the world has moved to digital economy due to the impact of the COVID-19.

Umeh added that the bank had introduced digital DiamondXtra accounts openings and would as well train its customers digitally.

According to her, new or existing customers can either open a DiamondXtra account in any of its Access Bank branches across the country or fund their account with a minimum of N5,000 to qualify them for the draw.