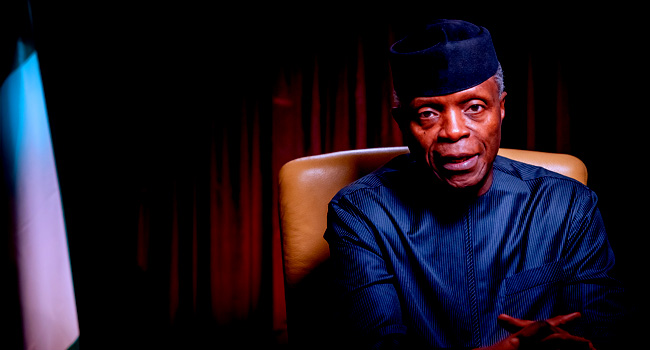 By Chijioke Okoronkwo
Abuja, May 13, 2022 Vice President Yemi Osinbajo has called on African, Caribbean and Pacific States(OACPS) to collaborate and collectively review and address issues affecting them especially on peace, security, climate change and debt relief.
Osinbajo’s spokesman, Laolu Akande, in a statement on Friday, said the vice president received the Secretary General of OACPS), Mr Georges Chikoti, on a courtesy visit to the Presidential Villa, Abuja.
The vice president said he was pleased that OACPS was taking the path of proactively engaging with member states.
” I think this is really crucial because as with any of the multilateral organisations, we need to not only be constantly engaged with member states, we also need to understand what it is that is going on.
“This fits into your strategic objective which is to engage and to modernise the organisation and to look for alternative means of financing and be more efficient; it is very commendable and I am very pleased to see that it is a step you are taking.”
He commended the organisation for its efforts and commitment to restructure for better service delivery.
The vice president said that member states were happier when resources were directed at programmes that benefitted them directly.
“Just looking at the thematic area that the organisation has outlined, some require much attention, the theme on peace and security, climate change and environmental sustainability.
“We may be shortchanging ourselves by making commitments to carbon neutrality within the time specified by wealthier countries and not taking into account our challenges and peculiarities,” he said.
Osinbajo urged OACPS, being an organisation that was concerned with South-South collaboration, to champion some of the important themes on climate change and especially the perspective of the developing countries.
The vice president said that though the issue of debt cancellation for developing countries was gaining traction, it is crucial for African states to be bold and forceful in its advocacy.
“I think that one of the major initiatives that the global South has to really promote now is how to be able to take care of its health needs –of course with as much support that we can get from the wealthier countries.”
Earlier in his remarks, Chikoti said the visit to Nigeria was part of his tour of member states of the OACPS to speak about ongoing reforms and restructuring in the organization.
He said the OACPS was making efforts to secure new alliances and strengthen strategic partnerships especially with the European Union and others to achieve set objectives.
The OACPS secretary general said the organisation had constituted an inter-regional coordination committee, a business forum, cultural foundation, a parliamentary assembly, among others, to ensure efficiency in the running of the body.
He acknowledged Nigeria’s contributions to member states through technical cooperation over the years, and commended the leadership of President Muhammadu Buhari and the vice president in actualization of goals of the country’s Technical Aid Corps programme.
Chikoti was accompanied on the visit by the Minister of State for Foreign Affairs, Amb. Zubairu Dada, Nigeria’s Ambassador to Belgium, Amb. Obinna Onowu, among other officials from the OACPS and Federal Ministry of Foreign Affairs