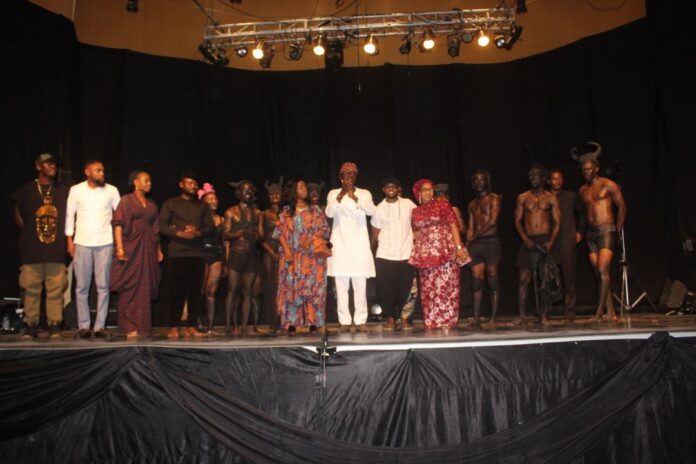 By Taiye Olayemi
Lagos, May 11, 2022 The Lagos State Ministry of Tourism Arts and Culture, in collaboration with QDance Company, has premiered the internationally acclaimed and award-winning musical, Reincarnation, in Lagos.
The Premiere was held on Friday at the Glover Hall, Lagos.
Naija247news reports that ‘Reincarnation’ is an interdisciplinary creation that showcases the depth of Yoruba philosophy and mixed with the current Nigerian youth culture.
It also features a variety of Nigerian dances marked by the rhythm and groove of cosmopolitan cities like Lagos.
Lagos state governor, Mr Babajide Sanwo-Olu, noted that the presentation was a unique and inspirational rendition that Lagos could proudly export to the world.

He reiterated his conviction that youths in Lagos state were talented and expressed confidence that more quality productions would emerge from the crop of artists in the state.
The state governor also commended the Artistic Director, Mr Qudus Onikeku, for his efforts in the entertainment industry.
In her presentation, Mrs Uzamat Akinbile-Yussuf, the Lagos State Commissioner for Tourism, Arts and Culture, said that the concept was designed to project Lagos as a major destination that would continue to attract local and international tourists for entertainment, arts and culture.
Akinbile-Yusuf noted that the collaboration with QDance was intended to serve as a medium to expand the concept of tourism.
She said it was also to engender a paradigm shift from conventional models of heritage-based cultural tourism to new models of creative tourism.
On his part, Onikeku explained that the choreography was written with a highly musical structure combined with intricate and carefully designed visual aesthetics layered in three parts – Birth, Death and Rebirth.
Onikeku said that it offered the world access to the ingenuity and hospitality of Lagos residents.
He added that the new creation was, however, the result of six years of continuous research with young dancers in Nigeria.
Dignitaries at the Premiere included the wife of the governor, Dr Ibijoke Sanwo-Olu, and Commissioner for Establishments, Training and Pensions, Mrs Ajibola Ponnle.
Others were Permanent Secretary in the Ministry of Tourism, Arts and Culture, Mrs Oyinade Nathan-Marsh, and Senior Special Assistant on Tourism, Arts and Culture, Mr Tunji Seymour.