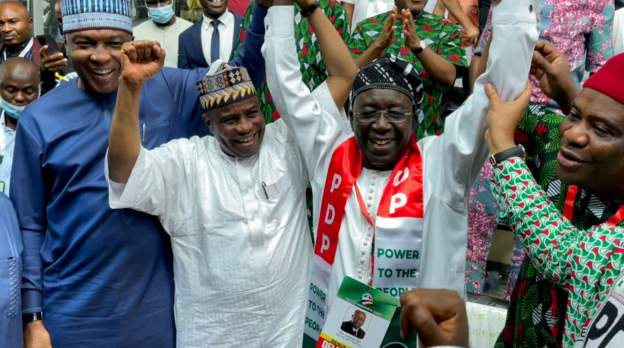 By Wandoo Sombo
Abuja, May 10, 2022 The Federal High Court, Abuja has ordered accelerated hearing into a suit seeking to stop the forthcoming presidential primary elections of the Peoples Democratic Party (PDP).

Justice Donatus Okorowo gave the order on Tuesday while ruling on an application for abridgment of time argued by Mr Paul Erokoro (SAN) on behalf of the plaintiff, Mr Cosmos Ndukwe.

Justice Okorowo held that time was of the essence in the matter and that it would be in the interest of justice for the suit of the plaintiff to be fully determined before the May 28 date of the primary election.

The judge asked the PDP, it’s National Chairman, Mr Iyorchia Ayu and the National Secretary, Sen. Samuel Anyanwu to file their responses to the suit against them within four days.

The judge fixed May 18 for adoption of final addresses in the suit saying a date for judgement would be fixed immediately after the adoption of addresses.

Erokoro had in the application pleaded with the court to abridge time for the suit of his client to be expeditiously heard.

The defendants, however, opposed the application for abridgment of time and accelerated hearing, claiming that there was nothing urgent about the case of the plaintiff.

Mr Mahmud Magaji, (SAN), representing the PDP said that the plaintiff had nothing to lose if the party went ahead with the scheduled presidential primary.

He said this was because the action of the party could also be nullified by the court if found to be taken on faulty steps.

They argued further that It would be unfair to give the plaintiff 14 days to file the suit but reduce their own time of response.

The defendants also said that abridging their time would amount to”tying their hands to the back” while expecting them to respond.

In his submission, Mr Kalu Agu, counsel to the 3rd defendant (Anyanwu) claimed that it would not be in the interest of justice for the court to abridge time when his client was yet to be served with the suit.

Naija247news reports that Ndukwe, had on April 28 filed an ex parte application for an order of injunction restraining the PDP from proceeding with its scheduled primary election.

He said the May 28 primary election should be put on hold pending the hearing and determination of his suit challenging the position of the party on the issue of zoning the party’s presidential ticket.