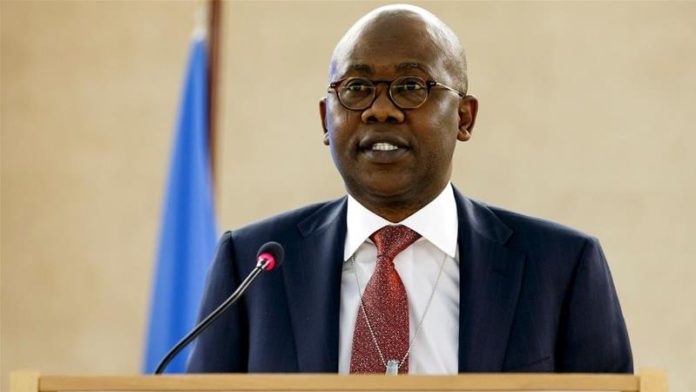 By Taiye Agbaje
Abuja, May 10, 2022 Aminu Lawal, an investigator with the EFCC, says Aliyu Abubakar, a co-defendant in the trial of former Attorney-General of the Federation (AGF), Mohammed Adoke, was never detained during the investigation leading to the case.

Lawal, the 2nd prosecution witness (PW2) in the trial-within-trial of the money laundering charge preferred against the duo by the anti-corruption commission, on Tuesday told Justice Inyang Ekwo of a Federal High Court, Abuja.

During cross examination by Akin Olujimi, SAN, counsel for Abubakar, the witness said during the three interview sessions he had with the defendant, he (Abubakar) was always released on bail after the exercise.

Lawal also restated that Abubakar, who was 2nd defendant, was neither enforced to make statements not induced to implicate others in the course of the investigation.

When Olujimi asked the witness to explain how his client was invited for questioning on Jan. 25, 2020, he said Abubakar “was called and he came with his lawyer, Yusuf Ahmed.”

He said the statement was taken in the presence of his lawyer.

But the senior lawyer further asked Lawal to tell the court where his client was between Jan. 2, 2020 and Jan. 27, 2020, insisting that he was detained by the agency.

The witness disagreed that Abubakar was detained by EFCC, saying the defendant was detained during the time in the commission’s facility based on the order of the FCT High Court where he was being tried for another matter.

He said the court ordered the police to remand him in the EFCC detention.

“Was it not the EFCC lawyer that asked for his remand,” Olujimi asked.

“I don’t know, but the court ordered for his remand,” Lawal insisted.

He said the three statements were taken at the conference room of the executive chairman of the anti-graft agency located at Wuse II, Abuja.

He said though there was no closed-circuit television (CCTV) camera in the hall, the interview sessions were recorded with the commission’s HP Laptop and copied into a flash drive.

He explained that at the end of each exercise, Abubakar would attest to the statements with his signature.

Lawyer to the EFCC, Ofem Uket, tendered the flash drive in evidence.

Justice Ekwo then adjourned the matter until Wednesday for trial continuation.