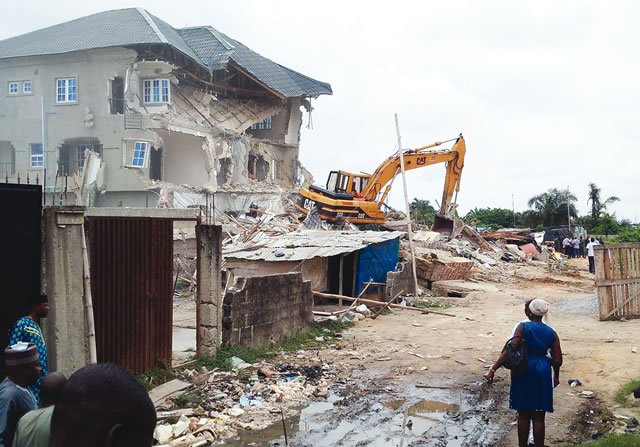 By Grace Alegba
The Lagos State Government on Monday said it would embark on a weeklong demolition of distressed buildings in Ebute Meta and other areas of the state.

It said that the exercise was to prevent building collapse and safeguard lives and property.
This is contained in a statement by Mr Mukaila Sanusi, spokesman of the Lagos State Ministry of Physical Planning and Urban Development.

Sanusi said that the commissioner in the ministry, Dr Idris Salako, gave the hint in his office in Alausa while giving updates on government’s plans toward averting building collapse.

He quoted the commissioner as assuring that only identified defective buildings in the state would be taken down.

The commissioner said the exercise would focus on “structures already marked as distressed by the Lagos State Building Control Agency (LASBCA), particularly in Ebute-Metta East where an occupied building collapsed a week ago with many others vividly showing distress signs”.

Salako is quoted as saying that it became pragmatic to promptly demolish structures earlier identified as critically distressed to avert disaster during the rainy season.

The commissioner said that this would be done while the assessment of structures in the area and other parts of the state continued.

“The administration of Mr Babajide Sanwo-Olu is committed to ensuring the security of lives and property.

“This underlies our resolve to act promptly in addressing the spate of building collapse by removing unihabitable structures before they cause more havoc, especially during the rainy season when such buildings are more prone to collapse”, he said.

The commissioner urged residents to be extra vigilant and report anomalies through the state government’s communication channels.

He said they should do so particularly through the Lagos State Ministry of Physical Planning and Urban Development Mobile App available on Google Play and IoS.