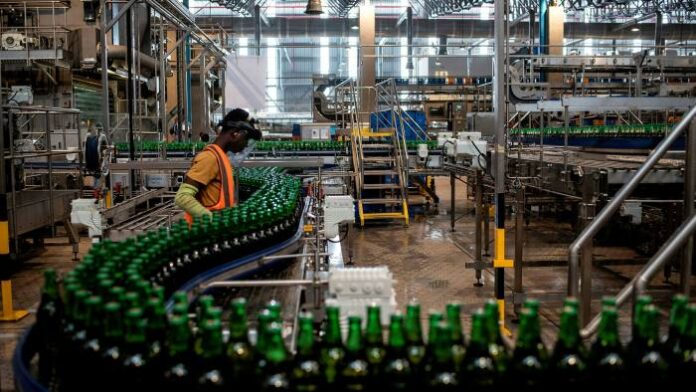 Lagos, May 5, 2022 The Manufacturers Association of Nigeria (MAN) said the Manufacturers CEO’s Confidence Index (MCCI) stood at 53.9 points for the first quarter of the year.

This is against the 55.4 points achieved in the fourth quarter of 2021, translating to a decline of 1.5 points.

Engr. Mansur Ahmed, the President, MAN, made this known in the MCCI quarterly report released on Thursday in Lagos.

Ahmed said the MCCI figure had remained above the 50 neutral points since the second quarter of 2021.

He said the decline recorded in Q1, 2022 still confirmed the sustained confidence of the sector on the economy in spite of the slight reduction in the performance in the quarter.

Ahmed said part of what contributed to the decline in the index score was eroding disposable income of consumers, high interest rates and excessive drive for revenue by government.

“Others factors are neglect of the economy for politics, acute shortage of foreign exchange, insecurity, and immediate impact of the Russian-Ukraine crisis on diesel, wheat and other imported manufacturing products.

“Overall, the score suggests fairly stable confidence in the economy, driven primarily by improvement in current business condition, though the performance was affected by declining employment and production conditions arising from familiar constraints.

“The general decline and the dimmed outlook for the second quarter evidenced by expectations of lower production, employment and unfriendly business condition, is a cause for concern.

“This obviously calls for the crafting of a National Response and Sustainability Strategic Plan to avert the looming economic crisis and shortages that would arise from the impact of the Russia invasion of Ukraine,” he said.

Ahmed said findings from sector analysis had shown that operations of manufacturing concerns in the wood and wood products, electrical and electronics and motor vehicle and miscellaneous assembly groups were heavily challenged.

He said index score of wood and wood products was 48.9 points; electrical and electronics was 49.9 points and motor vehicle and miscellaneous assembly was 49.2 points; all below the 50 base points.

This, according to Ahmed, affirmed low confidence in the economy, poor performance and the struggling status of these manufacturing sectoral groups.

Ahmed said the performance of the afore-mentioned zones was clearly depicted by the index scores of 48.3, 44.8 and 46.0 points respectively, which fell below the 50 neutral points threshold index score.

“In broad terms, the lackluster performance recorded in Bauchi/Benue/Plateau, Abuja and Rivers industrial zones are attributed to the unbridled disruption of manufacturing activities by high insecurity, rising operating cost and the general manufacturing unfriendly environment.

“In specific terms, peculiar contributory factors for Rivers State include the prevailing low interest in the productive sector evidenced by shrinking industrial landscape, low support for the manufacturing sector and the overly concentration on trade and services,” said Ahmed.

The expert said available facts and recent experiences showed that the emergence of a challenge in one country could become a major constraint with spiral effects for the entire world.

Ahmed said the learning curves from recent development included the need for leaders all over the world to jointly manage global peace and deepen the cord of interdependence of countries.

“The implication of allowing the invasion to continue for the manufacturing sector will include enormous decrease in capacity utilisation (as factories begin to experience stock-out situations), inflation, dwindling sales, lower productivity, unemployment and heightened insecurity.

“Certainly, all of these would also have severe implications for economic and social well being of over 200 million Nigerians.

“For the first quarter of 2022, feedbacks from manufacturers identified limited supply of electricity, high cost of local and imported raw-materials, persisting acute shortage of forex for importation of machine and others as factors limiting its performance.

“Undoubtedly, the precarious situation that the manufacturing sector is currently in and the looming dangers ahead call for a National Response and Sustainability Strategy to guarantee the survival of sector and avoid further de-industrialisation,” said Ahmed.