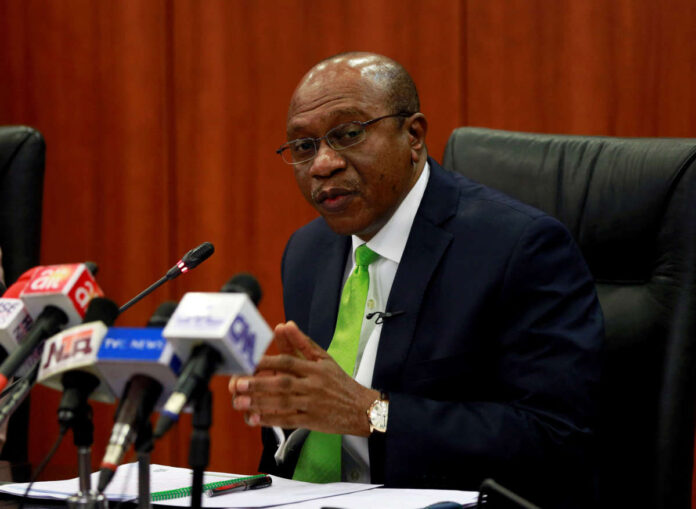 ABUJA – News of Emefiele’s presidential bid sent the naira close to a record low of 591 per dollar on the black market, against a range of 413 to 417 naira on the official market where it has traded this year.

Nigeria’s Central bank governor Godwin Emefiele had said to seek the ruling All Progressives Party (APC) ticket to run for president next February, a ruling party spokesperson said on Friday.

President Muhammadu Buhari will step down after serving two four-year terms following a February 2023 ballot. His ruling APC has set its primaries to decide on their presidential candidate for May 30-31.

Emefiele will go head-to-head with current Vice President Yemi Osinbajo and former Lagos state governor Asiwaju Bola Tinubu, who are frontrunners in the race to be the next candidate to head Africa’s top economy.

“I can confirm that central bank governor bought the APC presidential form today,” the APC spokesperson said, referring to forms to contest for the party’s nomination.

Political parties in Nigeria should pick presidential candidates by June 3, according to the electoral commission, while official campaigning will begin in September.

Emefiele is serving a second term at the central bank where he has pursued dovish policies on interest rates, introduced currency controls and launched a company to help build infrastructure in Nigeria, Africa’s most populous nation.

The ex-Zenith Bank chief executive has tried to avoid a large currency devaluation that is frustrating foreign investors stuck in Nigeria at the height of a recession triggered by the COVID-19 pandemic.

Political power in Nigeria tends to shift between the oil-rich, largely Christian south and the poorer, mostly Muslim north. Buhari is from northern Katsina state and APC’s next candidate is expected to come from the south.

Some questioned whether Emefiele will be able to remain at the helm of the central bank while pursuing his political ambitions which would require a strong coalition of supporters with deep pockets to take on opponents.

“Is his position as central bank governor still tenable?,” one economist, who is a consultant to the central bank and declined to be named.

News of Emefiele’s presidential bid sent the naira close to a record low of 591 per dollar on the black market, against a range of 413 to 417 naira on the official market where it has traded this year.