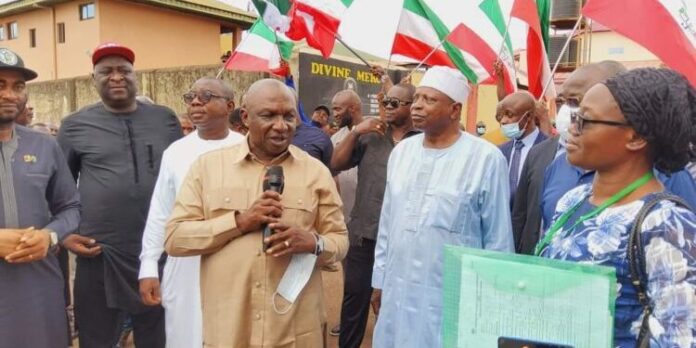 Enugu, April 30, 2022 (NAN) The Enugu State Electoral Committee assigned from the National Secretariat of the Peoples Democratic Party (PDP) to conduct ward congresses in the state has adjudged the exercise as peaceful, transparent and credible.

The congress was monitored by officials of the Independent National Electoral Commission (INEC) and the media on Saturday in Enugu.

Speaking, Chairman of the panel mandated to elect the three-man ad hoc delegates, Mr Vincent Amaabai, expressed delight at the peaceful atmosphere of the exercise across the 260 electoral wards of the state.

The chairman added that the process was well-organised and lauded the Gov. Ifeanyi Ugwuanyi-led PDP leadership in the state for the peaceful outcome of the exercise.

He disclosed that the panel would soon submit the names of those who emerged winners to the PDP National Secretariat in Abuja.

The committee was led by the Chairman of the PDP in Enugu State, Mr Augustine Nnamani, to supervise the congress in Umunevo, Ward 02, Ogui Nike, Enugu North Local Government Area.

Amaabai, accompanied by other committee members, Mr Okey Ahiwe and Dr Adetokumbo Pearse to the ward, said: “We are members of the PDP state electoral committee who have come from the National Secretariat of our great Party in Abuja to conduct the ward congresses.

“We want to inform you that delegates’ election is a proper election supervised by INEC and we are happy that the INEC representative is here monitoring this exercise.

“It is either done by consensus or by queuing behind candidates of your choice. The list of the three ad hoc delegates that emerge here is what we will send to our PDP National Secretariat in Abuja.

“Nobody can change anything. It is what you people do on the ground here that we will submit to Abuja.

“The person here is the representative of INEC, Anthony Obinna, who was sent to monitor this ward congress, you have seen everything yourself.

“That is how PDP does its thing. Everything is transparent and peaceful.

“I want to tell you people again that the national secretariat of our party has so much respect for the PDP in Enugu State under the leadership of Gov. Ifeanyi Ugwuanyi.

“This is because since the PDP national officers assumption of office November 2021, nobody has heard any complaint from Enugu State and we hope that this record will continue,” he said.

At Umuenwene Ward, Enugu East LGA, where members of the electoral committee were received by the Speaker of the Enugu State House of Assembly, Mr Edward Ubosi, the member representing Enugu East/Isi-Uzo Federal Constituency, Cornelius Nnaji and the Council Chairman, Nze Livinus Anike.

The committee chairman equally expressed satisfaction with the peaceful conduct of the exercise which was also monitored by an INEC official.