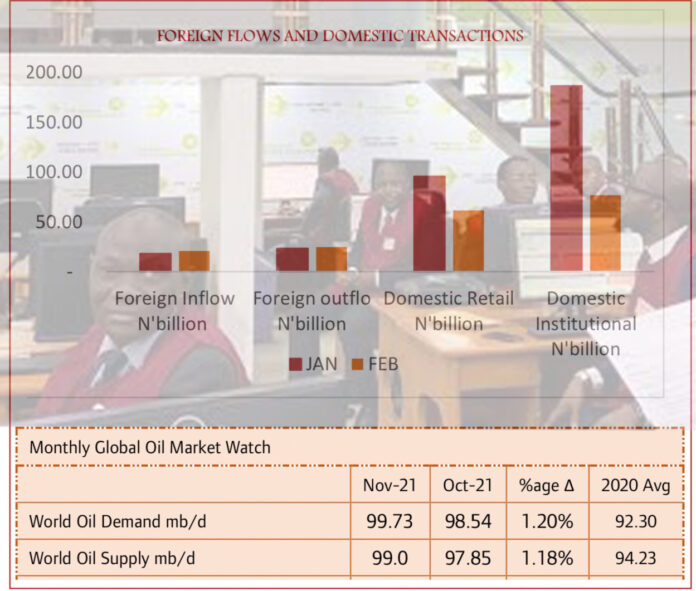 The latest released report by the Nigerian
Exchange (NGX) on domestic and foreign
portfolio participation in equities trading
showed that total equities market transactions
decreased by 43.24% from N 323.38 billion in
January 2022 to N183.56 billion and in February
2022.

When compared to February 2021, the
result shows that total transactions decreased
by 14.85% y-o-y.

Further analysis of the total transactions revealed that total domestic transactions decreased by 51.02% m-o-m from N282.07billion in January to N138.13billion in February 2022, total foreign transactions increased by 9.97% m- o- m to N45.43 billion

the very weak appetite of foreign portfolio investors (FPIs) which continue to decrease amid sustained fear of foreign exchange volatility eroding their returns on investment and insecurity currently being encountered in the country.

Foreign investors appeared to have their reservations about the Naira not being fairly priced against the greenback.

More so, local investors seem to be taking profits as companies’ full year 2021 results is being released, while others especially the institutional players are taking position in expectation of the Q1 2022 financial results of corporates.

With the recent releases of companies’ audited FY 2021 financial statements, domestic investors appear to be set for a rewarding dividend pay-out – as their returns are not as prone to exchange rate risk.

Despite the dividend announcements from corporates, we still saw local players participation in the equities market decrease in February than in the month of January 2022.

Also, the institutional composition of the domestic market m-o-m decreased by 58.85% from N186.51billion in January 2022 to N76.74billion in February 2022. Further breakdown showed that domestic institutional investors outperformed retail investors by 11%.

On the part of local investors, we saw increased stake in the equities market – their purchase transactions were N70.92 billion, higher than N67.21 billion worth of outflows

Given the declining participation of the foreign investors in the equities market amid worsening state of insecurity and the fear of further depreciation of the Naira against other foreign currencies, especially the greenback, we saw the positive performance of the local stock market index dwindle to 1.65% from 9.15%.

It appears the local institutional and retail investors also took profit in the month of February as their participation in the market moderated as well.

Going forward, we expect that Q1 2022 financial statements to be released by companies before the end of April 2022, to stimulate investors’ interest as we anticipate increased earnings.

Nevertheless, we feel that investors should be cautious in joining the bandwagon race, but wait to see the Q1 2022 results in order to position in companies with strong fundamentals, which would further enhance capital gains.