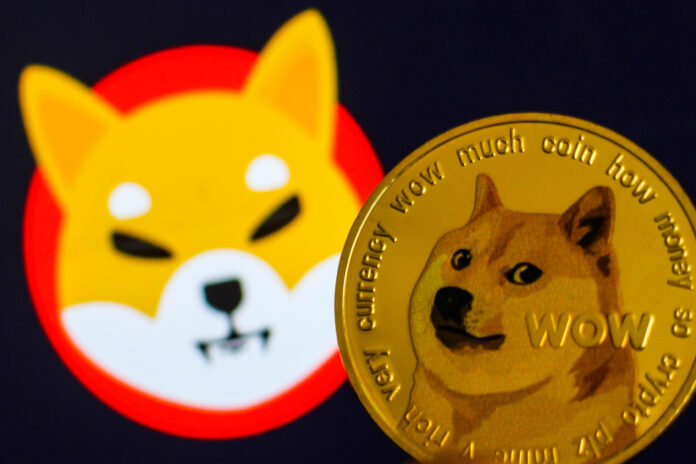 Bitcoin dropped back below $40,000 amid volatile price swings across financial markets, while day-trader favorite Shiba Inu jumped about 10%.

Shiba Inu and three other tokens — Solana’s SOL, Polygon’s Matic and Compound’s COMP — were all listed for the first time on Robinhood Markets Inc.’s platform. Shiba, which trades at a fraction of one U.S. cent, was the biggest gainer of the four.

Bitcoin “is still consolidating in a triangle pattern stretching back to mid-January,” said Jeffrey Halley, senior market analyst at Oanda. “The lower and upper boundaries today are $36,500 and $47,500,” he said, implying that Bitcoin was well within its range.

Crypto’s correlation with U.S. tech stocks has risen sharply in the past few weeks, suggesting investors increasingly view digital assets as vulnerable to tightening monetary conditions. By contrast, the massive stimulus the Fed flooded markets with during the Covid outbreak drove Bitcoin to a record of almost $69,000 in November.

A break above or below those support or resistance levels could lead to an $18,000 move either way, Halley added.

Strategists at Bespoke Investment Group point out that Bitcoin’s drubbing on Monday led to the coin collapsing through its 50-day moving average. “From a strictly technical perspective, Bitcoin isn’t trading well right now as the benchmark crypto asset has followed a similar playbook to stocks since late 2021: a major downtrend, a failure to make new highs on the rebound (and indeed, an outright rejection of its 200-DMA in BTC’s case), and now another trip below the 50-day,” they wrote in a note.

Noelle Acheson, head of market insights at Genesis Global Trading, says there are two big narratives at play for Bitcoin: one is that the coin is a risk asset and it’s going to move in tandem with other riskier assets. She points to its correlation with a basket of non-profitable tech companies — a 90-day reading shows the highest correlation on record. Another narrative is that long-term investors are accumulating Bitcoin because they don’t see it as a high-volatility play — instead, they view it as a store of value or an inflation hedge.

“With so much accumulation and with more and more Bitcoin being held in illiquid or longer-term addresses, whichever definition you wish to choose, there’s less available for the macro investors or for the new market participants,” she said by phone. “Anyone new coming in has to source the Bitcoin from an ever-dwindling stockpile of liquid Bitcoin — in other words, those that are moved around by traders, which is what’s keeping the volatility relatively high.”