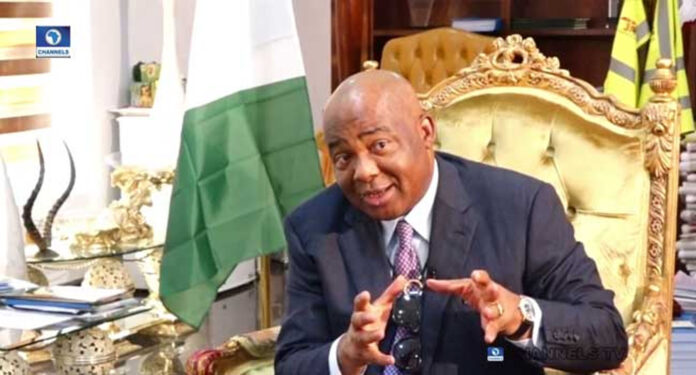 Governor Hope Uzodimma of Imo State has challenged Nigerian patriots, mainly the political class, to rise up and address the Igbo question of marginalization and injustices as part of their contribution towards a united country.

Governor Uzodimma said the time to wipe the tears of Ndigbo is now and that the patriots who can do so, having done same for the South West in 1999 in the wake of the Yoruba’s cry over the annulment of the June 12, 1993 election won by Chief MKO Abiola, are still around and politically active.

( April 9, 2022) in his remarks at a reception organised for the President General of Ohanaeze Ndigbo Worldwide , Prof. George Obiozor, at the Banquet Hall of the Imo State Government.

Uzodimma’s remarks reads: “I am happy to behold the cream of Igbo leaders who could find the time to be here today for this solidarity reception we have organized in honour of our father and son, our leader and servant and, indeed, our cross bearer, His Excellency, Professor George Obiozor, the President General of Ohanaeze Ndigbo worldwide.

“I am aware that some of you only received a late invitation to this event and made extra sacrifices to be here on such a short notice. When I scan the faces of the distinguished compatriots who have come to join me to honour Professor Obiozor with their esteemed presence, I see real love, genuine love that transcends party politics.

“I also perceive a degree of commitment tinged with anxiety and concern over the future of the Igbo race. Also palpable in the house today is a genuine concern about the political fate of Ndigbo in project Nigeria. By your presence here today, you have assured me that I am not the only one who thinks Professor Obiozor deserves our respect, appreciation and best wishes. This is because he is the arrowhead of an organization at the forefront of the battle to defend and protect the socioeconomic and political interests of Ndigbo.

“In my opinion, it was a huge sacrifice for Professor Obiozor to accept to serve the Igbo race in this capacity. As a former ambassador to the United States, Professor Obiozor is a household name across the country and beyond. It is to our advantage that a man of such pedigree accepted to serve us in this capacity. It is heart-warming that Igbos have turned up in good numbers to honour and celebrate him. It beats my imagination, therefore, that those who conspired and burnt down his house were also Igbos. What a paradox!

“More perplexing about this paradox is that the two divides – those who honour him and those to deride him – claim to have the same goal, which is a better future for Ndigbo in the Nigerian federation.”

Governor Uzodimma who used the opportunity provided by the reception to reiterate his condemnation of spate insecurity in Imo State in particular and South East in general appealed to the Igbo leadership to join hands with government and security agencies to end the unfortunate situation.

He said dialogue remains the most potent instrument to resolve all differences globally no matter how bad the situation may be.

He said even though it is a known fact that Ndigbo have not been fairly treated in Project Nigeria since the Civil war ended, the issue of their marginalization and poor treatment could still be dealt with through dialogue and persuasion rather than by violence agitation.

Governor Uzodimma said luckily Nigeria can still boast of active political patriots who waded in to resolve the agitation that engulfed the South West that affected the fortunes of Nigeria in the wake of the annulment of the 1993 general election won fair and square by Abiola.

He said in the wisdom of the patriots the two major political parties then were persuaded to allow the South West field their presidential candidates from the zone and noted that it will not be a bad idea if a similar position is taken by the patriots as it concerns the South East and their quest for justice and fair play over the 2023 presidential election.

“In the over a decade that I have been in public office, first as a senator of the federal republic and now as a Governor, I have devoted a lot of time to ponder on the Igbo agenda in the Nigerian federation and what we as leaders should do to realize it. As most of you may already know, I have written a book on the subject matter. In the book, “Reflections on the Igbo Question” my position had been that we Igbos need a united Nigeria to vent our God – given talents. This is because Nigeria provides us with the space and opportunities we need to actualize our political and socioeconomic destiny.

“This is why I am deeply appalled by the raging spate of violence currently ravaging the Southeast. At the risk of repeating oneself many times over, dialogue, and not violence is the vehicle that will lead us to our desired destination. There is no evidence in history to show that any race had ever become great through violence and self destruction. When a man begins to urinate into a well which he drinks from, it only proves that he is on a suicidal mission. I think that as a people who have endured and survived a turbulent and brutal past, we should be wiser than that.

“No one in Nigeria can deny the fact that Ndigbo are zealous, patriotic and committed to the oneness of Nigeria. Our people can be found in every nook and cranny of Nigeria. Igbos are the most dispersed of all the ethnic groups in Nigeria. Unlike other tribes, Igbos have investments in the 36 states and Abuja. These investments can be found in real estate, manufacturing and in the financial sector and in commerce. These are mostly solid investments which can only be made by those who have unflinching faith in their country.

“All that the Igbos demand from Nigeria is a level playing field for all to operate and compete,where necessary. Like the Igbo adage will say, all the Igbos are asking is Egbe bere Ugo bere (This translates to “Let the kite perch and let the eagle perch too”). Simply put, Ndigbo want justice and equity for all Nigerians. No more, no less.

“In the aftermath of the unfortunate events of the civil war and considering the immediate post – war discriminatory policies against Ndigbo, many of our people felt sidelined and marginalized. Over the years, many pan – Igbo groups and intellectuals have tried to get this message across to the rest of Nigeria. While some have done so with a great sense of patriotism, a few may have gone off the cuff to do so in a temperamental and unconventional manner. My worry is that while the Igbos have an unassailable case over their post – civil war treatment and plight in the Nigerian federal project, the logic of that case may be compromised by the temperamental actions of non – state actors, to the peril of everyone.

“This is why I think that the time has come for every patriot to rise and address the Igbo question. What cannot be taken away is that for too long Igbos have cried out profusely over their plight. This plight is comparable to the plight of the Southwest over the annulment of the June 12 elections. Following that annulment, the Southwest felt short changed. They cried out for justice. While some groups did so responsibly, others resorted to violence.

“The instructive thing here is that at a point the patriotic zeal in the political class in Nigeria was touched and they rose in unison to acknowledge that the Yorubas had cried enough and that it was time to wipe their tears. That was why the two major political parties in Nigeria fielded only Yoruba candidates for the 1999 presidential elections. Of course, even a political neophyte knew that this was not accidental, but a well planned act by a group of patriots who had placed the unity of Nigeria uppermost in their minds.

“It is now obvious from every indication that Ndigbo have also cried enough about their marginalization. It should also be clear to the political class that the time has come to wipe these historical tears of Ndigbo. What is more, most of the patriots who engineered the plan that made the Southwest produce the presidential candidates for the two major political parties in 1999 are still alive and active in politics. That same undying love for the country that inspired them to do what they did for the Southwest in 1999, should inspire them to do the same for the South east in 2023.

“The West, the North, the East and the South are all important in our quest for national unity. This a clarion call on the political class to do the needful. As the saying goes, E mee nwata otu emere ibe ya, obi a di ya nma” This simply means, the only way to make a child happy is to treat him or her the same way you treated the other child.”

Earlier in his speech, Prof Obiozor thanked Governor Uzodimma for his support for Ohanaeze Ndigbo Worldwide and more importantly, for his commitment towards peaceful, united, prosperous and a developed Imo State.

Obiozor reiterated his call for all political parties to zone their presidency to the South East and reminded his guests that allowing the South East produce the President of Nigeria in 2023 will be the masterstroke Nigeria needs for a completely united country where equity, justice and fairness will reign.

The Ohanaeze Ndigbo Worldwide President General also thanked his guests for coming to honour him and be part of the interaction on how to better the lot of the Igbo.

The reception was well attended by prominent Igbo sons and daughters from the five States that comprise South East.