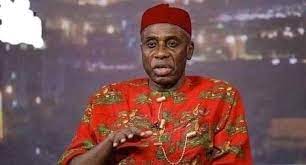 The Minister of Transportation, Rotimi Amaechi has been charged by a governorship aspirant of the All Progressives Congress in Rivers State, Dakuku Peterside to contest in the 2023 presidential election.

Peterside while speaking in Port Harcourt said Amaechi is “eminently qualified” to preside over the affairs of Nigeria.

Peterside said, “Amaechi has left no one in doubt as to his fabulous large heart to score infrastructure goals for the country. Not even his dyed-in-the-wool enemies would deny that Amaechi has performed excellently as Minister of Transportation.

“Today, Nigerians call him ‘Mr. Connect-Nigeria’ due to his drive to re-build, re-brand, re-position and revive the nation’s railway infrastructure, connecting the East to the West, North to the South through modern rail lines and subways. He has connected seaports to railway stations for the smooth freighting of goods to the necessary markets.

“Amaechi has also worked to secure Nigeria’s waterways, and protect Nigeria’s critical maritime infrastructure for the growth of the economy and wellbeing of our citizens.

“Amaechi has shown sufficient mental strength to manage a country as diverse as Nigeria as well as her nationalities. De-tribalised to a fault, Amaechi sees the East, West, North and South as Nigeria and not regions or states, and treats Nigerians first and last as Nigerians. He showed that much off as governor of Rivers State when he appointed Nigerians of other states of origin as Commissioners in his cabinet.”

According to Peterside, since Nigeria returned to democratic rule in 1999, Amaechi had been schooled in governance and political diplomacy.

He added, “In Amaechi’s case, as a humble student in Nigeria’s politics and governance, he has intimidating credentials. As Speaker, Rivers State House of Assembly, his colleagues-speakers elected him Chairman, Conference of Speakers. His leadership qualities endeared him to them and when it was time for his re-election, in the face of external interference, they resisted dictatorship to re-elect him.”