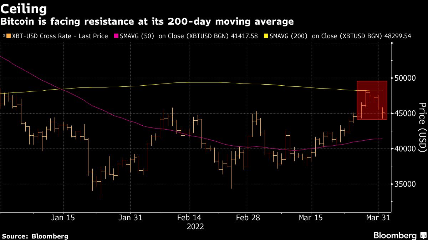 Bitcoin fell back toward the top of a range that’s largely defined it so far in 2022, after meeting resistance at a key technical level and amid some concerns about potential regulation.

The largest cryptocurrency pared most of its loss after falling as much as 3.3% on Friday to $44,252 and is still trending toward its fourth-straight decline after making a run toward its 200-day moving average earlier in the week.

“Bitcoin and other digital assets declined overnight due to a mix of factors,” said Hayden Hughes, chief executive officer of social-trading platform Alpha Impact. “Technically, markets were entering overbought territory and even in sustained bull runs, we expect pullbacks along the way.”

Hughes and Edul Patel, the chief executive officer and co-founder of digital-asset trading platform Mudrex, also cited a plan backed Thursday by a panel of the European Parliament wherein crypto transactions would be covered by EU rules requiring that financial transfers carry information about the identities of payers and payees.

“Although this does not ban interactions with unhosted wallets such as Metamask, it will place significant friction on users,” Hughes said.

Market dynamics may also be an issue, according to JPMorgan Chase & Co., which sees stablecoins’ share of cryptocurrency market value as an indicator of potential for rallies or declines. The assets are tokens that typically are pegged to traditional currencies like the dollar.

“The share of stablecoins in total crypto market cap no longer looks excessive and as a result we believe that any further upside for crypto markets from here would likely be more limited,” JPMorgan strategists led by Nikolaos Panigirtzoglou wrote in a note. “This share currently stands below 7% which brings it back to its trend since 2020.”

Another factor making waves in crypto was an interview with U.S. Senator Elizabeth Warren, a high-profile critic of the crypto industry, on NBC News Now’s “Meet the Press Reports.” She backed further efforts to create a U.S. central-bank digital currency, and compared crypto markets to asset bubbles in the past.

“The whole digital world has worked very much like a bubble works,” Warren said. “And that is it keeps going up based on what? Based on additional production? No. Based on the fact that it has demonstrated that it’s solved all these other problems and it is now being used exponentially in areas where it hadn’t been used before? Not really.”

“It’s moved up on the fact that people all tell each other that it’s going to be great,” Warren said.