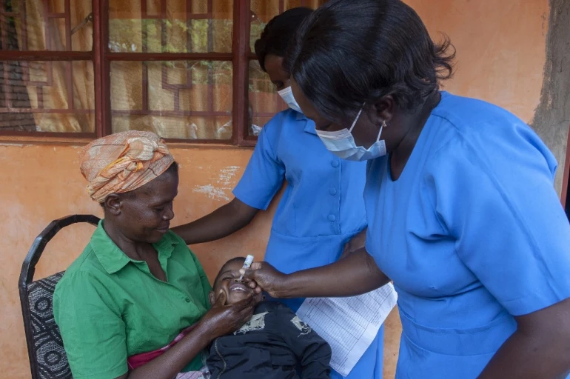 Blantyre, Malawi – At the Gateway Clinic in Blantyre, Malawi’s second-biggest city, a sense of fulfilment overwhelmed Gloria Kasula after she had her three-year-old child vaccinated against polio.

“I always want to put the well being of my child first at all times,” the 31-year-old fruit seller told Al Jazeera on Monday, her baby nestled on her back. “That’s why I had to put everything aside and come here to have my child fully protected because right now we are at a very scary moment.”

As she left the hospital, 10 other mothers were seated on benches, waiting for their children to get the free oral vaccine too.

On Sunday, Malawi rolled out the first round of a mass oral polio vaccine campaign for children under the age of five after the southern African nation recorded its first case of wild poliovirus (type 1) in 30 years, last month. The case was a 3-year-old girl in the country’s capital, Lilongwe, who was paralysed as a result of the infection.

It remains the only confirmed case in the country but authorities said since the virus spreads quickly and silently, even one case is considered an outbreak. They are hoping that other parents follow Kasula’s move and take their children for immunisation.

“This vaccination is very important in the sense that we need to protect our young ones,” said Dr Charles Mwansambo, principal secretary at the Ministry of Health. “This one case might tell that there are other cases that we are not able to pick up, that’s why we are very serious with this issue.”

A nationwide campaign
Polio, a viral disease with no cure, is capable of crippling those affected by it. It can be passed from one person to another through ingestion of food or water contaminated with the faeces of an infected person or with other bodily fluids. Doctors say children under five are more susceptible to the disease.

For decades, African governments fought to eradicate the virus and in August 2020, the continent was certified free of indigenous wild polio.

The Malawian case is the first on the continent since then.

According to a statement by the World Health Organization, “the region’s certification as wild polio-free remains unchanged” because “laboratory analysis linked the strain detected in Malawi to the one circulating in Pakistan’s Sindh Province”.

Mozambique, Tanzania and Zambia, Malawi’s three neighbours, are also due to begin the first round of vaccination campaigns on Thursday.

During the first phase of the campaign, 9.4 million children are being targeted across the four countries. Three subsequent rounds are set for April, June and July, with a target of more than 23 million children.

According to Dr Janet Kayita, country representative for WHO Malawi, environmental surveillance systems for polioviruses have also been set up in 11 sites across four cities in the country: Lilongwe, Blantyre, Mzuzu and Zomba. All health workers have been trained to be aware of what symptoms to look out for and when to suspect that a child may have polio.

In order to make sure that no child gets left behind, the campaign will also target rural areas with scanty health services.

“We are using a house-to-house strategy so as eliminate physical barriers that some parents face,” Kayita said. “Health facilities that are closest to the people will also offer the polio vaccine.”

The WHO, the Global Polio Eradication Initiative and UNICEF are involved in the immunisation drive.