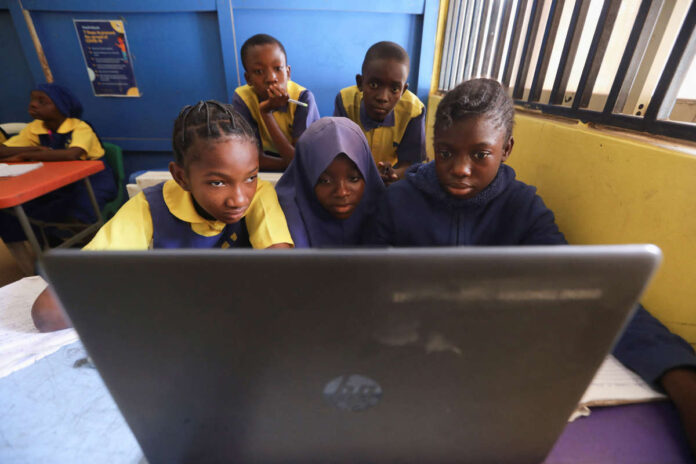 ABUJA – A Nigerian school is targeting students from poor families to give them a chance to excel at science, maths and engineering for a fee of 100 naira (25 cents) a day, hoping they can hone skills to help their families escape poverty.

One student, 12-year-old Faridat Bakare who enrolled at Knosk Secondary School in Abuja in 2020, a year after it opened, has set her sights on becoming an engineer.

In a technical laboratory at the school, she shows off a prototype for a solar-powered car made from cardboard, which she developed with her classmates.

“I want to become an electrical engineer who works with robots and solar panels and all the connections of all the snap circuits and … things like that,” said Bakare, who lives with her mother and four siblings in a poor neighbourhood in Abuja.

Knosk School runs largely on donations and school officials visit each family to establish that they have no capacity to pay full fees, which would work out at 66,000 ($159) naira a term.

The school currently has 82 pupils but is expanding each year.

Irene Bangwell, founder of Knosk, said the idea of a science-oriented high school for poor children came to her eight years ago when she had to take her child to hospital. When she heard a cleaner there tell another patient that her young daughter was also a cleaner instead of being in school, Bangwell’s heart sank.

“When we decided to run the Knosk School, we had to ask ourselves ‘what kind of education does (a) poor man’s child need to break out of poverty’,” said Bangwell, a former teacher trainer.

She says she plans to set up more such schools in Nigeria.

At least 10.5 million children in Nigeria do not attend school, the highest rate in the world, the United Nations said in January. Most affected are girls, children with disability and those from poor households.

“We said how can we fuse into learning, for the poor, enough value so that they can break out of poverty,” said Bangwell.

Students at Knosk spend 75% of their time studying science, technology, engineering and mathematics and when they graduate, each student has to develop a prototype of something they can use or pursue after school.

For the 100 naira a day fee they pay, students are given uniforms, books, lunch and girls are given sanitary pads once a month.

“I believe that she will wipe away my tears, all my suffering will end through her,” Bakare said from her home as she selected cassava to sell at a local market.