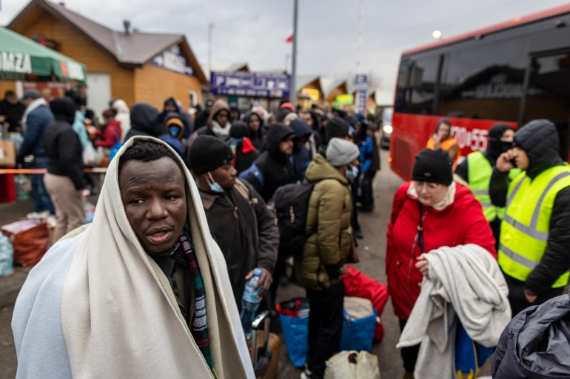 The government of the Democratic Republic of the Congo has announced that it has evacuated at least 223 of its citizens out of Ukraine since the start of the Russian invasion, according to local media.

According to the minister, who gave an update to the senators over the issue, Congolese evacuees were mostly students, 171 of whom are currently in France.

At least 42 have taken refuge with host families and 10 others have been in a shelter in Poland.

The minister said there were still some 20 students who were yet to leave Ukraine but stressed that the government was working to get them out of the country.

Meanwhile, the families of the children, who have been stranded in Ukraine and elsewhere, remain worried back at home.

Speaking to France-based Africanews, Solange Kahindo, a resident of Goma, said she had been unable to reach her children Djodjo Katanga and Kasereka Katanga, both students in Ukraine.

After the war broke out in the country, they informed her that they were able to cross into Poland, but there was total silence after that.

“We have heard that the Congolese government is going to intervene so that the children come back,” she said. “But, unfortunately, as the days go by, nothing is done.”

She added that life in DRC was not good due to war, and that was why they sent the children to study in Ukraine, unfortunately, to face war again.

Another woman, Faida Ntantine, whose son has been missing since crossing into Poland, shared similar concerns.

“I’m afraid because I don’t know where my son is,” she said, after trying to call Alain Chirimwami and sending him messages repeatedly.

“Now I spend all day in front of the television following the news and hoping that there will be any news about him,” she told Africanews.