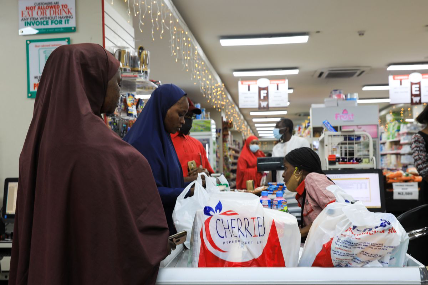 ABUJA, March 15 – Nigeria’s inflation climbed 0.1 percentage point to 15.70% in February, the statistics office said, after fuel shortages stoked transport and other costs, while the war in Ukraine could drive up the cost of wheat imports in the coming weeks.

A continuing halt to Ukraine’s grain exports caused by the war, could hit African countries, a report has said. read more

Wheat was Nigeria’s second biggest import during the fourth quarter after petrol, the statistics office said on Tuesday.

“Higher grain prices and disruption to the supply of wheat from Russia and Ukraine may exacerbate inflationary pressure,” Standard Chartered’s Razia Khan said.

Soaring global oil prices have had little impact as Nigeria, though a crude oil exporter, depends almost entirely on imported gasoline which it subsidies.

“In the long run, we may not be gaining (from high oil prices) because of the tendency of bringing in inflation into the country,” Simon Harry, head of the National Bureau of Statistics, said on Tuesday.

“There are so many dimensions that the (Ukraine) crisis would be affecting the economy … so that even the projections made for growth for 2022 may remain a mirage,” Harry told reporters in Abuja.

IMPORTED INFLATION
Inflation in Nigeria has been in double-digits since 2016, impacted by food-related pressure and currency weakness, prompting the government to put restrictions on foreign exchange supplies for certain items.

Nigerian authorities have said persistent inflationary pressures are structural – linked to deficits and not solely to the money supply – and largely imported.