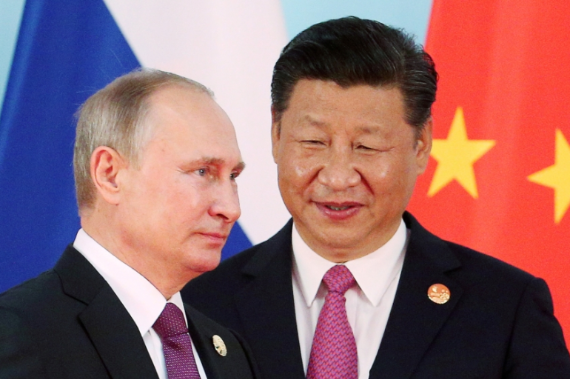 Apologists of Russian President Vladimir Putin around the world continue to hold that he is a “realist” and “a rational actor”, and blame his invasion of Ukraine on the West breaking its 1989 promise to not expand NATO eastward. Following this line of argument, the most logical solution to the current conflict, they argue, is to allow Russia to reabsorb Ukraine into its sphere of influence.

True realists, including those in Beijing, need to abandon this outdated and meritless argument as soon as possible. Putin is clearly no longer the merciless but rational autocrat he once was. Justifying Putin’s aggression would only increase the risk of another Great War. And if the world gets burned, China too will lose. Therefore, Beijing must move now and stop Putin, not only to prevent another devastating conflict, but to secure its own gains.

However, Putin insists on three conditions for peace, two of which are unrealistic. He not only wants Ukraine to assume a “neutral status”, but also demands “demilitarisation and denazification of the Ukrainian state” and official recognition of Russia’s annexation of Crimea.

While Ukraine has signalled its willingness to drop its aspiration to join NATO even before the war broke out, the two other demands are hard to swallow for Ukrainians, especially after experiencing the trauma of an invasion and suffering casualties.

Given Putin’s denouncement of Ukraine’s statehood and baseless accusations of Nazism and genocide he directed at its government, it is logical to assume what he would accept as “demilitarisation and denazification” would go well beyond the conditions of neutrality the Soviet Union once imposed on Finland.

Thus, it is possible to assume that in Putin’s mind, a “denazified” Ukraine is something in between post-War Hungary and post-rebellion Chechnya. As such an arrangement would allow Ukraine little autonomy even in domestic affairs, many Ukrainians would likely prefer to die fighting rather than surrender.

Persistent resistance and mass casualties would only invoke more sanctions from the West and beyond, which in turn will spur anti-war discontent within Russia, with both the elite and the masses feeling the pain of sanctions and isolation. All of this will in turn anger and frustrate Putin more, pushing him into further irrational actions.

A rational Putin would stop now, and secure his gains on the negotiation table. If he stops today, he can de facto occupy Crimea, Donetsk and Luhansk as he did South Ossetia and Abkhazia after his brief war against Georgia. He can use the frozen conflict in Ukraine for deterrence or to strengthen his hand in his future negotiations with his ex-Soviet, ex-Warsaw Pact neighbours.

But today, there is little reason to expect Putin to act rationally. The Russian leader expected Ukrainians – at least the Russian-speakers he pledges to protect – would welcome the Russian invaders with open arms. And when he did not receive the welcome he expected, after only five days, he put his nuclear forces on high alert – this is not the action of a rational man. Putin seemingly thought, and probably still thinks, that both Ukraine and the West would eventually bow to his demands if he just keeps pushing. He is neither rational, nor a realist. Today, Russia’s president is a rouge, unpredictable actor, a mega-sized Kim Jong-Un, in the Russian roulette of geopolitics.

“If he is reckless enough to pulverise Ukrainian civilians and risk popular rebellion,” Cold War historian Professor Mary Elise Sarotte recently warned, “he may be reckless enough to provoke NATO.” Indeed, what if Kyiv 2022 turns out to be the new iteration of Sarajevo 1914?

Putin’s disconnect with reality might be emboldened by the “no-limit” friendship he sealed with China during the Beijing Winter Olympics. His conviction is also likely encouraged by his apologists worldwide, and especially in Asia, blaming the war on NATO’s eastward expansion, and suggesting the best way to avoid catastrophe is to give Putin what he wants.

True realists, however, must not agree to give Putin a blank cheque to do as he wishes to make reality more acceptable to him, as such an approach is more likely to bring about a new great war than a period of calm. Even if we are now at a point where a new cold war is inevitable, we should do everything possible to keep it at least as rational as the last one.

Now that a new cold war is looming on the horizon, the US should correct its ideology and nationalism-spurred mistake of lumping Russia and China together and thus uniting its two rivals, and return to Henry Kissinger’s successful policy of détente to cultivate a better working relationship with China.

Likewise, China must not be blinded by nationalist propaganda and lose sight of its gains and costs.

Until now, China is potentially the biggest winner of the Russia-Ukraine War in three senses.

First, the direct threat posed to Europe by Russia reduces the West’s focus on the Indo-Pacific and pressure on China.

Second, the war in Ukraine – and the increased need for cooperation with China it created – will lead the West to rethink its sympathy for Taiwan moving towards formal independence.

Third, the West’s latest set of sanctions on Russia, which weakened Russia and increased its dependence on China, may eventually reduce Moscow into a client of Beijing and Putin into Xi’s Lukashenko. The last is most significant for both Xi and China.

If this war truly reduces Russia into a client of China, Xi can supersede the legacy of Mao, who could only break with Khrushchev’s Soviet Union but never overtook it in their rivalry. He can even supersede Emperor Kang Xi, the most powerful ruler of the Qing Dynasty, who nevertheless signed the Treaty of Nerchinsk in 1689 that recognised Russia’s possession of Siberia north of the Amur river.

If China steps in and pressures Putin to end this war now, with a now dependent Russia as its sidekick, it could dominate Eurasia with its Belt-Road Initiatives. Xi would be the most powerful Chinese ruler since Kublai Khan in the 13th century. This would pose a great challenge to the West, but a rivalry with Xi’s China would likely be much safer than one with Putin’s Russia acting like North Korea.

Continuing its subtle support for Putin, however, would cost China greatly. It would not be just the spillover of the global sanctions, or the global economic turbulence, or the disruption to investments and imports that would harm China in this scenario. If Xi continues to tacitly support Putin’s irrational aggression towards Ukraine, the current escalation could result in an accidental nuclear war – and this would devastate China.

Sergey Alexsashenko, the former deputy chairman of the Russian central bank, pointed out a fundamental difference between Xi and Putin, who share similar backgrounds besides personal friendship. “For Xi, the history of China while he’s a mature man is a history of success, he wants to move ahead with this rebuilding for the future. For Putin, all good was in the past.”

If the conflict continues in its current trajectory, Putin may eventually make a move that could trigger a world war, as he believes Russia has nothing to lose. But China has everything to lose if the world gets burned. And Xi would be cursed by Chinese nationalists for generations to come for missing out on China’s chance to be at the top.

For China’s own sake, Xi must therefore leverage Putin’s growing dependence on China to push him to end the war.

The views expressed in this article are the author’s own and do not necessarily reflect Al Jazeera’s editorial stance.