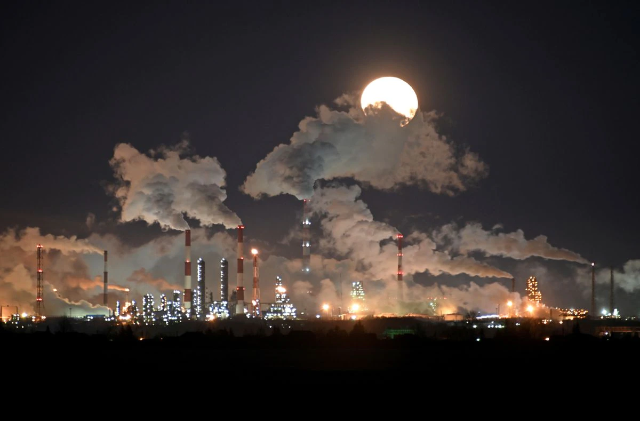 EU leaders to approve goals at Thursday-Friday summit
Joint EU defence, Ukraine bid to join EU on agenda too
BRUSSELS, March 7 – European Union leaders will agree at a summit this week to phase out the EU’s dependency on imports of Russian gas, oil and coal, a draft statement showed, marking a turning point in its policy towards Moscow prompted by Russia’s invasion of Ukraine.

EU leaders will meet in Versailles on Thursday and Friday to discuss boosting their joint defence capability and Ukraine’s bid to become a member of the 27-nation bloc.

Burned by the experience of supply shortages in microchips and pharmaceuticals during the COVID-19 pandemic, the leaders will also discuss how to make the EU more strategically independent of global suppliers in these sectors and food.

“We agreed to phase out our dependency on Russian gas, oil and coal imports,” the draft statement of the leaders, seen by Reuters, said.

The task will be tough, however, because the EU buys from Russia 45% of its imported gas, around a third of its oil and nearly half of its coal. This makes the bloc vulnerable should Russia decide to retaliate for EU policies by curbing exports.

The decision marks a turning point because only last year Germany was still pushing ahead to get the Russian Nord Stream 2 gas pipeline operational while Italy, Austria or Hungary – among the EU states most highly dependent on Russian energy supply – were in no rush to seek alternatives.

But the Russian invasion of Ukraine changed everything, the leaders said.

“Confronted with growing instability, strategic competition and security threats, we decided to take more responsibility for our security and take further decisive steps towards building our European sovereignty, reducing our dependencies and designing a new growth and investment model for 2030,” it said.

The leaders said the EU would diversify its energy supplies and routes through the use of liquified natural gas (LNG) and the development of biogas and hydrogen.

Europe will also accelerate the development of renewables and the production of their key components. Further, EU countries will connect European gas and electricity networks to share the resources better, fully synchronise power grids and reinforce contingency planning for security of supply.

In other strategic areas like the production of microchips, needed for most advanced machinery and electronics, the draft showed leaders would set a goal of more than doubling Europe’s market share of their production to 20% by 2030.

The EU will also seek to develop its pharmaceutical sector to become a leader in bio-medicines, and invest in digital technologies like Artificial Intelligence, cloud computing and the deployment of 5G mobile networks.

Food will be in focus too. “We will improve our food security by reducing our dependencies on imported agricultural products and inputs,” the draft leaders’ statement said.

After years of reliance on the United States as the ultimate security backstop for Europe, a policy which drew criticism from former U.S. President Donald Trump, Europe will now spend much more on defence, the draft added.

“We agreed to increase substantially defence expenditures, with a significant share for investment, focusing on identified strategic shortfalls, and with defence capabilities developed in a collaborative way within the European Union,” the draft said.