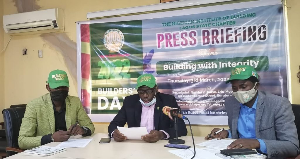 By Grace Alegba
Lagos, March 3, 2022 The Nigerian Institute of Building (NIOB) has appealed to Federal Government to subsidise cost of building materials to curb skyrocketing prices of construction inputs in the country.
Chairman, Lagos Chapter of NIOB, Mr Lucky Isename, made the call on Thursday at a media briefing to announce the institute’s forthcoming 2022 Builders’ Day programme from March 7 to March 13, 2022.
Represented by the immediate past Chairman of the chapter, Mr Sunday Wusu, Isename said most construction materials were imported making them expensive and resulting in quality compromises, causing building collapses.
He urged government to increase funding into researches for local alternatives to ensure construction of affordable housing.
Isename said several researches ignored by the Nigerian government were being taken over by foreigners who develop them and sell back to the nation at exorbitant rates.
“Until government come into the housing sector to subsidise a lot of things, inflation will continue because the housing stock we have, there is a always shortfall, so it can never be affordable,” he said.
Speaking on activities lined up for 2022 Builders’ Week, the chairman said the event would focus on advocacy to stop the corruption culture in the the construction of houses causing building collapses.
He said the theme for the third edition of Builders’ Day is “Building with integrity”, to educate stakeholders in the built-environment on the need to adopt integrity at all building construction stages.
He said the objective of the Builders’ Day is to create awareness and sensitize all stakeholders that “it’s now paramount to build with conscience and comply with approved standard/production information.
“We want to bring to your notice, the revised Lagos State Building Control Agency (LASBCA) Regulation, recognised builders’ document as part production information documents on all building project sites in Lagos State,” he said.
He said none adherence to provisions of the builders’ documents which stipulates that registered builders must be on every site for supervision violates the Revised LASBCA Regulation 2019.
“Although, there have been several cases of building collapse in Lagos State, one of the most recent the collapse of the 21 storey building at Gerrard Road, Ikoyi, which claimed many lives including the life of the owner of the building.
“It is widely accepted that building collapses are associated with quacks and not professional registered builders, he said.
He listed the seven built environment professionals which include architects, builders, structural engineers, quantity surveyors, land surveyors, town planners, estate surveyors and valuers and their roles in executing successful building projects.
Naija247news reports that March 13, was chosen as annual Builders Day to commemorate the ugly incident of Ita-faji building collapse which killed school children on March 13, 2018