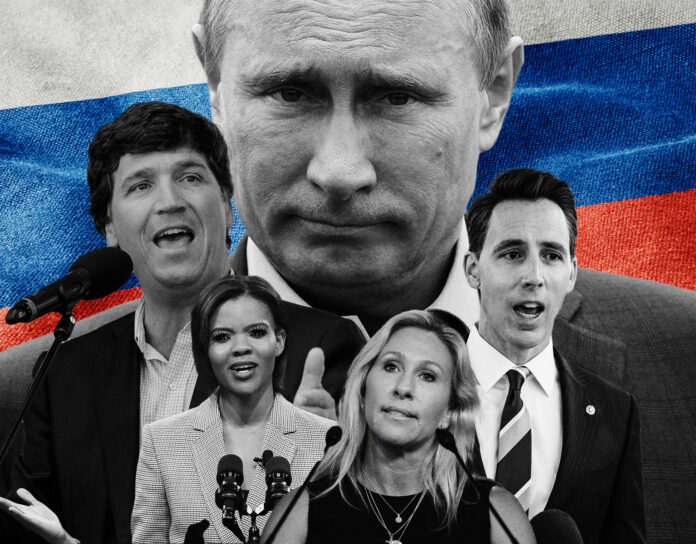 As Russia’s deadly invasion of Ukraine continues, a number of prominent American conservatives who had previously been complimentary of Vladimir Putin have been forced to confront past comments praising the Russian president.

For years, Putin has enjoyed support from an unlikely coalition of elected Republican officials, conservative Christian leaders and right-wing television hosts, whose praise has ranged from admiration of his intelligence to his hardline position against progressive cultural ideas.

“The question of the American right’s support for Putin and Russia is a complex, many-layered issue,” Devin Burghart, president of the Institute for Research and Education on Human Rights, told Al Jazeera.

“There is an attraction to Putin’s hardline authoritarian stance and his aggressive foreign policy. Others are attracted to the brand of traditionalist Christianity Putin has expressed. Some like Putin’s attacks on the Russian LGBTQ community.”

In many ways, the American right’s Putin problem starts at the top.

Former President Donald Trump, who has voiced admiration for Putin for years, appeared to praise the Russian leader’s advances days before the invasion on February 24, calling the moves “smart” and “savvy”.

“Putin is smart,” Trump also told a gathering in Mar-a-lago, Florida, on the eve of Russian forces’ all-out attack on Ukraine, which has killed hundreds of civilians and forced more than a million people to flee. “He’s taken over a country for two dollars worth of sanctions. I’d say that’s pretty smart.”

But Trump changed his tune after the invasion, taking a harder stance on Putin’s actions. “The Russian attack on Ukraine is appalling,” he said in a speech during the Conservative Political Action Conference on February 26. “We are praying for the proud people of Ukraine. God bless them all.”

In the days before the invasion, Fox News host Tucker Carlson questioned why Americans should be made to prefer Ukraine over Russia, or to hold a negative view of Putin.

“Hating Putin has become the central purpose of America’s foreign policy … Very soon, that hatred of Vladimir Putin could bring the United States into a conflict in Eastern Europe,” Carlson said in a segment, part of which was rebroadcast on Russian state television. “Before that happens, it might be worth asking yourself, since it is getting pretty serious: What is this really about? Why do I hate Putin so much? Has Putin ever called me a racist? Has he threatened to get me fired for disagreeing with him?”

Like many others, Carlson’s tone changed when the tanks began rolling into Ukrainian territory in the following days. “Vladimir Putin started this war,” Carlson said after the invasion began. “He is to blame for what we’re seeing tonight.”

Widespread admiration
In recent years, Putin also has made inroads with some leaders of the American Christian right, who viewed Russia as a country that led on moral issues while, in their view, the US fell into moral decay.

Support for the Russian leader among some American evangelicals dates back to the 1990s, when they began noticing Russia’s renewed embrace of Christianity in the aftermath of the Cold War, said Sarah Posner, author of UNHOLY: Why White Evangelicals Worship at the Altar of Donald Trump.

“Russian leadership post-communism was embracing this idea of Russia as a Christian nation,” Posner told Al Jazeera. Autocrats like Putin, she said, “are seen as model leaders now that America has become too liberal. Over time you start to see that trickle down to the base.”

In 2013, for example, Russia enacted an anti-LGBTQ law that banned “propaganda” that promoted “nontraditional” relationships for children. Franklin Graham, the son of the late Reverend Billy Graham, praised Putin for the law restricting speech around LGBTQ issues, arguing that it gave Russia the high ground above the US, which had “abdicated our moral leadership”.

“Isn’t it sad, though, that America’s own morality has fallen so far that on this issue—protecting children from any homosexual agenda or propaganda—Russia’s standard is higher than our own?” Graham wrote. “In my opinion, Putin is right on these issues.”

Last week, Graham appealed to Christians to pray that Putin halt his plans for attack. “Pray for President Putin today,” Graham tweeted. “This may sound like a strange request, but we need to pray that God would work in his heart so that war could be avoided at all cost.”

Far-right stands by Putin
Although many conservatives have backtracked in response to the ongoing invasion, some on the far-right continue to voice support for Putin and Russia’s attack on Ukraine.

Nicholas Fuentes, a far-right activist who the Anti-Defamation League has labelled a white supremacist, cheered on Putin’s advances. “I wish Putin was president of America,” Fuentes posted on Telegram before the invasion. After it began, he added: “I am totally rooting for Russia.”

In a speech at the America First Political Action Conference in Florida later that week, Fuentes celebrated the invasion. “Can we give a round of applause for Russia?” Fuentes said, while people in the crowd chanted “Putin! Putin! Putin!”

Russia’s appeal to far-right activists like Fuentes derives from a belief that Putin defends what they see as traditionalist values, while the US does not, said Marilyn Mayo, a senior research fellow at Anti-Defamation League’s Center on Extremism.

“They see Putin as conserving white Christendom in Europe,” Mayo said. “This grouping is opposed to globalism, multiculturalism, promoting what they see as modernist values like promoting the LBTGQ community, diversity, and allowing liberalism to dominate.”

Republican criticism
Among mainstream Republicans, however, Putin and his recent actions in Ukraine were widely condemned. “Vladimir Putin’s invasion of Ukraine is reckless and evil,” said House Minority Leader Kevin McCarthy, a Republican from California.

A bipartisan House Resolution on Wednesday that condemned Russia’s aggression against Ukraine passed overwhelmingly, 426 to 3. In the US Senate, Republican Senator Mitt Romney called for Russia to face “the harshest economic penalties” and that the nation be expelled “from global institutions”.

Romney, who in 2012 named Russia as the “biggest geopolitical threat facing America”, also called out fellow Republicans who had a history of praising Putin.

“A lot of those people are changing their stripes as they are seeing the response of the world and the political response here in the US,” Romney said in a CNN interview. “But how anybody — how anybody in this country, which loves freedom — can side with Vladimir Putin — which is an oppressor, a dictator, he kills people, he imprisons his political opponents, he has been an adversary of America at every chance he’s had — it’s unthinkable to me. It’s almost treasonous.”