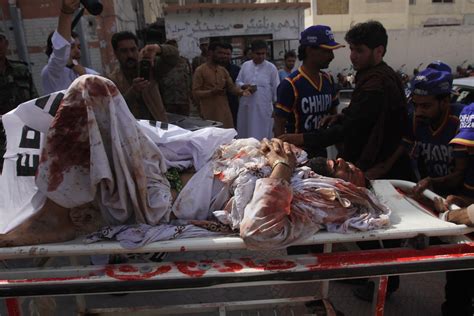 Islamabad, March4, 2022 (dpa/NAN) Twenty more people have died, making a total of 50 people in the two suicide bombings that took place in a mosque in north-western Pakistan on Friday.

“50 people have died while many are injured,’’ police and rescuers said.

The men fought their way inside the mosque compound in the city of Peshawar by killing police guards before blowing themselves up in the packed main hall, police official Haroon Rasheed said.

“We have retrieved around 50 bodies and more than 80 injured people from the rubble,” said rescue service official Bilal Faizi.

The death toll might rise as more than a dozen of those injured were in critical condition, said Mohamed Asim, spokesman for the city’s biggest Lady Reading Hospital, where most victims were brought.

Rescuers, police and volunteers had completed the search, Faizi said.

Faizi said the mosque was located in a densely-populated Shiite neighbourhood in the centre of city and most victims were Shiite Muslims, local resident Siraj Uddin said.

An eyewitness who was inside the hall told Pakistan’s Dunya television he saw two young men running into the compound and started firing shots randomly before the explosion.

“They shouted Allah-o-Akbar and a huge explosion occurred. There was smoke and screams all over.

“I then saw several bodies lying on top of each other and a river of blood flowing on the floor.”

No group had claimed responsibility so far, but both the Pakistani Taliban and the terrorist militia Islamic State had been targeting worshippers at mosques in Pakistan.

Violence had surged in the country since neighbouring Afghanistan fell to the Taliban last year.

The Pakistani Taliban, a separate group from their Afghan counterparts, had stepped up their attacks against the country’s security forces and civilians since the fall of Kabul.

Pakistani officials had said the group was operating from the border regions of Afghanistan, where they had been based since they were driven out from their hideouts in Pakistan in a series of military offensives.

Around 80,000 Pakistanis had been killed in violence orchestrated by Islamist militant groups like al-Qaeda, the Taliban and Islamic State.