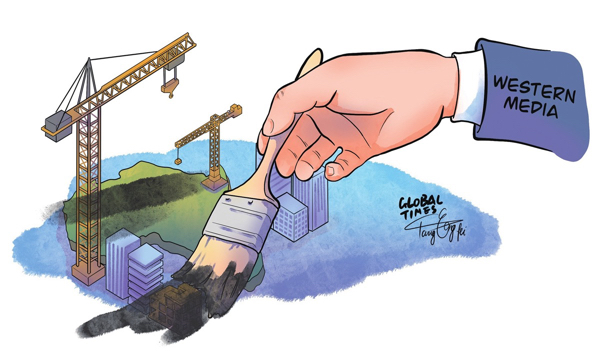 Citing risks of debt default in certain African countries, the Financial Times reported on Tuesday that China has “signaled a more cautious approach” and applied “the brakes to Africa lending.” In what looks more like an opinion piece than a news article, the outlet also repeated the “debt trap” vilification against China, claiming that “Chinese lending is essentially predatory.”

By retelling a fabricated story claiming Uganda was facing the risk of losing core asset to China due to a repayment difficulty, the piece, citing so-called analysts, described contract clauses of the financing projects from China as “toxic.” Then it admitted that despite an accusation that strategic assets could be seized by Chinese lenders due to default, “in no case has this happened.”

The obvious trend here is that whether China accelerates or slows its lending to Africa, the West is ready to criticize China with their well-worn “debt trap” story. Behind the catch-all cliché, it is the West’s bare hypocrisy and sour grapes over the close China-Africa ties. Essentially, they just feel nerve-racking about even a ray of presence of China in the African continent, and they just want China gone no matter how that would affect the development of Africa.

Both Chinese and Ugandan officials have refuted the story suggesting Chinese lenders might “take over” Uganda’s only international airport after a debt default. Retelling a fabricated story is meaningless, and using it to undermine mutually beneficial cooperation between China and Africa is rather vicious.

Ugandan President Yoweri Museveni said in a Reuters interview that “the Chinese seem to have more spectacles for seeing business opportunities in Uganda here than your Western companies.” He added that “Uganda was working to sign a number of deals with Chinese private sector lenders in sectors such as agro- and fertilizer-processing, minerals processing and textiles.”

Evidently, what all Western media outlets can see in Africa are the inability of countries to repay loans for crucial infrastructure projects necessary for social and economic development and their inability to read contracts. Such level of arrogance is almost incredible until one reads articles like the one the Financial Times published.

African countries are in the real position to say whether Chinese investment is beneficial or not.

In fact, not one developing country has fallen into the so-called debt trap due to Chinese loans. And ironically, according to a fact-checking report by the Deutsche Welle, there are more precedents for European lenders to sue African governments for state assets than there are for China.

Unlike Western countries that have been plundering raw materials from Africa and trying to remould their political systems from upside down, China has been offering real support to facilitate the development of Africa with no political strings attached. That’s what appeals to African countries.

“From 2000 to 2020, China helped African countries build more than 13,000 kilometers of roads and railway and more than 80 large-scale power facilities, and funded over 130 medical facilities, 45 sports venues and over 170 schools,” read the White Paper of China and Africa in the New Era: A Partnership of Equals.

Besides infrastructure projects, cooperation between China and African countries has expanded to a wide range of fields, from agricultural, cultural, industrial, financial sectors to the digital economy. In order to help the continent to fight against the COVID-19 pandemic, China has provided more than 180 million doses of vaccines to 53 African countries and the African Union Commission as of the beginning of the year; and in November 2021, China pledged to provide another 1 billion doses of COVID-19 vaccine to Africa.

Circling back to the so-called “loan brakes” asserted by the Financial Times, it is only normal for market-based loans to fluctuate from time to time in line with changes to demands. That shouldn’t be hard to understand. That certainly does not suggest a major shift in China’s policy toward Africa, as the Financial Times appears to be asserting.

The deep friendship between China and Africa was not built in one day, and China’s support for Africa remains strong, no matter how hard Western media outlets try to undermine it. China will continue to boost cooperation with Africa on the basis of mutual benefit and respect.

The author is an editor with the Global Times. bizopinion@globaltimes.com.cn