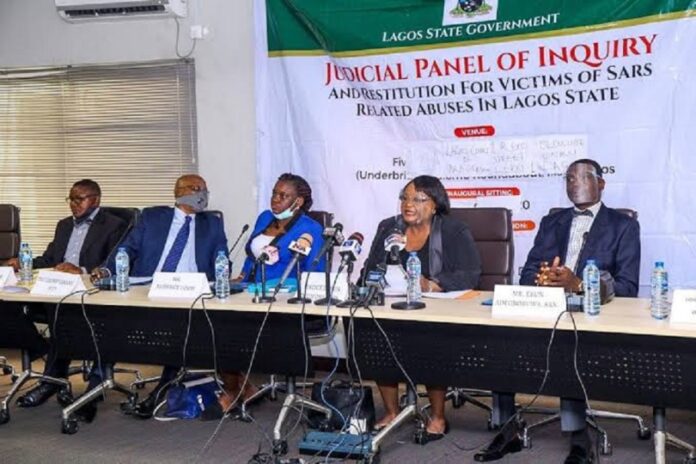 LONDON – Nigeria’s Lagos State rejected findings by a judicial panel that security forces carried out a “massacre” of unarmed protesters last year, maintaining that only one person suffered a gunshot wound, according to a paper issued by the government this week.

The judicial panel, which submitted its full report last month, was tasked with investigating October 2020 shootings that ended weeks of nationwide protests over police brutality and sparked the worst civil unrest in Nigeria since its return to civilian rule.

A leaked copy of the report said the army fired live rounds at peaceful protesters in a “massacre” at the Lekki Toll Gate, a huge motorway toll linking Nigeria’s commercial capital with a peninsula to the southwest. It identified 11 people killed and four missing and presumed dead, and said nearly 100 other unidentified bodies could be linked to the incident.

Most of the army troops deployed at the toll gate were “not fit and proper to serve”, and certain members of the police force should be prosecuted, it said.

But Lagos State, in a “white paper” issued late on Tuesday, said the “evidence before the (panel) does not establish arbitrary and indiscriminate killing of protesters”.

It called the panel’s recommendations based on the allegations of killings “totally unreliable and therefore unacceptable”, and said some recommendations, such as the prosecution of some police, could be implemented only if more evidence was found.

It also rejected the panel’s finding that parts of the state government had helped cover up the massacre, and referred recommendations on disciplinary action for army personnel and training for police to the federal government and army.

President Muhammadu Buhari has said the government will wait for pronouncements from state governments before determining any further action. Information Minister Lai Mohammad already rejected the Lagos report, saying it was strewn with errors and not backed by evidence.