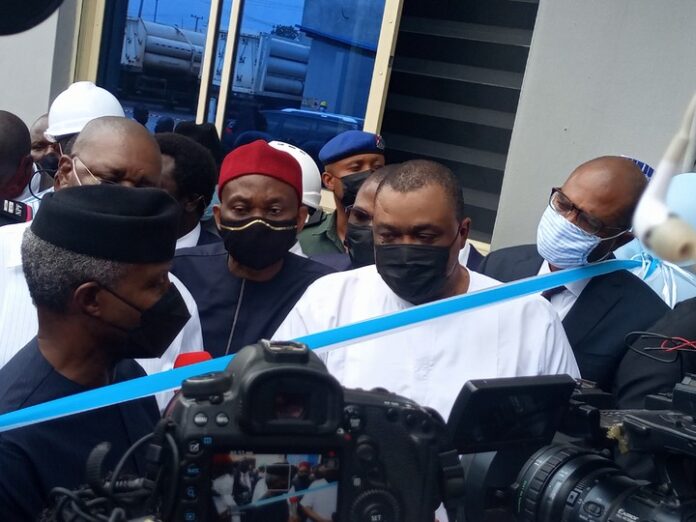 Delta State Commissioner for Energy, Engr. Jonathan Ukodhiko, on Monday said that Governor Ifeanyi Okowa was committed to the creation of power generation hub in the State.

Engr. Ukodhiko, stated this during the official inauguration of the 8.5 Mega Watts Independent Power Plant, IPP, by the Vice President of the Federal Republic of Nigeria, Prof. Yemi Osinbajo in Asaba, the state capital.

In his address, he said “Though the power sector has been privatized and it is now the purview of the private sector to provide electricity, the State Government intervened in various ways, because of the commitment of our people’s Governor, Senator Ifeanyi Okowa to the people of the State to engender prosperity for all Deltans”.

“From 2015 when the Okowa administration came on board, the Ministry of Energy executed several critical electricity projects around the 25 Local Government Areas of the State to ensure steady electricity supply and improved socioeconomic activities of our people”.

Giving detailed analysis of the project, he said, “Your Excellency, in line with the Ministry of Energy’s assigned duties in keeping with the objective of the State Government to diversity the economy of Delta State, the Asaba 8.5MW IPP was conceived by the present Administration in 2016 in collaboration with Banstanchury Power Solutions Limited (BPSL)”.

“The vision of the government was to centralize the power generation of Government offices, MDAs, Residential quarters, Hospitals, Schools, Industrial Parks, and Government facilities including the Asaba International Airport, Asaba, in order to bring efficiency and stability of power supply to Government offices, and enhance efficiency in service delivery”.

“With due regard to the Distribution Companies, the performance of the public power supply as we know has been lackluster in recent years.

“This situation has not just impacted negatively on the socioeconomic well-being of our people but has been a challenge in the effective carriage of critical government services”.

He further explained reasons for establishment of Asaba 8.5MW Gas Plant which was precipitated by various observations saying,

“Government would also of necessity be required to invest on critical electricity infrastructure such as Transformers in all its offices and residential homes without the IPP”,

“The government monthly expenditures on BEDC Bills for its offices and other facilities, irrespective of its huge intervention expenditure on critical electricity infrastructure, on a monthly basis, is becoming unsustainable”,

“It was also observed that within the next 4-6 years, the Power Generating Plant sets, used by the MDAs would be replaced by the government due to obvious depreciation”,

Earlier, he said” Your Excellency, once the 8.5MW IPP, is commissioned, it will engender increase of electricity power supply to MDAs and other government facilities from the present 35% to about 90% which will boost efficiency and synergy between government agencies.

He listed other benefits of the Asaba 8.5MW IPP saying

“Uninterrupted streetlights within the State Capital which will reduce crime and promote socioeconomic activities.

“Reduction in environmental pollution within our office premises,Reduction of noise pollution as 70% of existing diesel and petrol generator sets would no longer be in use in MDAs.

“Enhancement of revenue generation;
Improved power supply to the general public by the BEDC because more captive electricity power will be free for distribution” he stated.

Ukodhiko, therefore commended Governor Okowa for delivering on his Stronger Delta agenda and for being proactive in conquering all obstacles to ensure the completion of this all important project.

In naming the coverage area of the project he said, “the Asaba 8.5MW Independent Plant is fully functional and has been operational for the past few months. Over 36 facilities including: Delta State Government House, Delta State House of Assembly, the Legislative Quarters, High Court of Justice, MDAs, other Residential quarters, Hospitals, Schools and Government facilities including the Asaba International Airport, Model Secondary School, Asaba Specialist Hospital, and Street light infrastructures”.