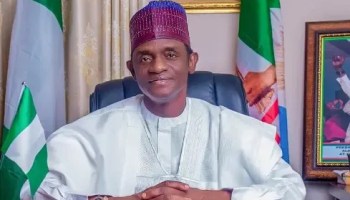 With the national convention of the ruling All Progressives Congress (APC) now fixed for February 2022, forces against the continued stay of Yobe State governor, Mai Mala Buni, as the National Caretaker and Ex­traordinary Convention Planning Committee (CECPC) chairman of the party, have intensified efforts to ensure he does not preside over the process.

One of the anti-Buni group told Daily Independent that the national secretariat of the party located at Blantyre Street, Wuse 2, Abu­ja, will witness the “mother of protests and lockdowns” in the next few days.

A former member of the House of the Representatives from Zamfara State, who is one of the arrowheads of the ‘Buni must go rally’, said any true lover of the party should not allow Buni to preside over the national convention based on the judgment of the Supreme Court on the petition filed by the Peoples Democratic Party (PDP) and its candidate in the October 10 governorship elec­tion in Ondo State, Eyitayo Jegede, challenging the victory of Governor Rotimi Akeredolu of the APC.

However, the Supreme Court in a split decision of four to three affirmed the election of Akeredolu as governor of Ondo State.

The majority decision de­livered by Justice Emmanuel Agim, upheld Akeredolu’s election on the grounds that the appeal by Jegede and the PDP lacked merit since the ap­pellants failed to include Mai Mala Buni, a party in the suit, which was fatal to their case.

While questioning the eli­gibility of Governor Buni to sign the nomination form of Akeredolu, the trio of Justices Mary Peter-Odili, Ejembi Eko and Ibrahim Saulawa in the minority judgment had de­clared that Akeredolu’s elec­tion should have been nullified, while the appellants (PDP and Jegede) declared winner of the election.

Justice Eko, further main­tained that Buni violated the constitution, when as a sitting governor, still acted as chair­man of the APC by submitting Akeredolu’s name to INEC for purposes of the governorship poll.

Despite the ruling which sharply divided the APC, its governors, under the aegis of the Progressive Governors’ Fo­rum, have repeatedly passed a vote of confidence on the Buni-led CECPC, while insisting that he is eligible to combine both the office of governor and acting national chairman of the party.

Speaking with Daily Inde­pendent on the possibility of Buni presiding over the con­vention, our source said they have mobilised youths across the country to stage protests aimed at forcing Buni to hands off his role as the acting na­tional chairman and focus on his elective role as Yobe governor.

“We are not relenting on our efforts to ensure Governor Buni resigns as the caretaker com­mittee chairman. But now that the convention has been fixed for February next year, we will mount serious efforts on him and we are hopeful of getting the needed results before the end of this year.

“Let him continue to barri­cade the national secretariat with policemen. We will prove to him that no individual is greater than the party. The APC governors are not helping mat­ters. We observed that they have been supporting Buni because he is one of them and always take sides with the governors whenever they are having any leadership struggle in their states.

“If you look at the judgment of the Ondo governorship elec­tion, you don’t need a soothsay­er to tell you that Buni is ineligi­ble to continue in office as APC chairman. For three Supreme Court justices out of seven to have said Akeredolu was not validly nominated because Buni signed his nomination form speaks volume.

“That Supreme Court rul­ing on Ondo election is just too close. Look at it this way. What if any of the four judges that ruled on the Ondo governorship elec­tion retires tomorrow? And the judges that replaced them believe that Buni is not eligible to function as APC chairman. If that case is brought before them, what ruling do you think they will give? What then hap­pens to our convention?”.

Also speaking with Daily Independent, Omoba Tunde Ajibulu, a member of the APC Presidential Campaign Coun­cil for the 2019 general elections, said only the National Execu­tive Committee (NEC) or con­vention can determine the fate of the Buni-led caretaker com­mittee.

“The National Executive Committee (NEC) of the par­ty in their own wisdom put up this committee which was meant to be for six months ab initio. I believe that tenure has been extended twice. So, it is not up to me but up to the NEC or a national convention that can determine when they should leave”.