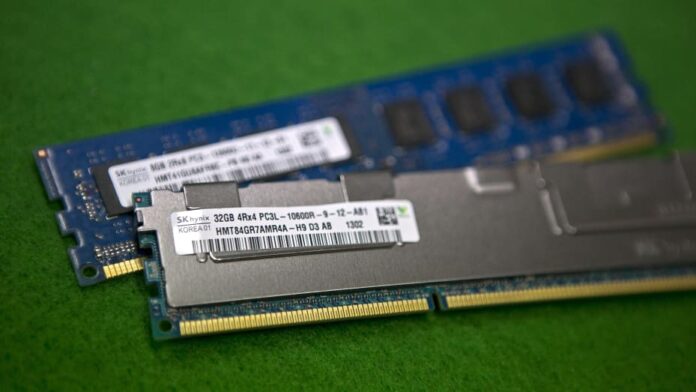 The global chip shortage could drag on till 2022 — but the situation could improve from mid-year as more supplies become available, according to Gokul Hariharan from JPMorgan.
An ongoing supply crunch for chips has hurt production across a number of industries, ranging from cars to consumer appliances, personal computers and smartphones.
Hariharan named two trends that JPMorgan is “really positive on over the next three to five years.”

The global chip shortage is set to drag on till 2022 — but the situation could improve from mid-year onwards as more supplies become available, a top semiconductor analyst at JPMorgan told CNBC.

The U.S. investment bank is recommending investors pursue longer-term trends in the semiconductor space — in areas like high-end computing globally as well as less-advanced technologies in China.

An ongoing supply crunch for chips has hurt production across a number of industries, ranging from cars to consumer appliances, personal computers and smartphones.

Some analysts and investors expect the shortage to last through to 2023, but JPMorgan is less bearish.

“We are not expecting 2023 to be in supply shortage — so, that is probably the first thing that we can say,” Gokul Hariharan, co-head of Asia-Pacific technology, media and telecom research at JPMorgan, told CNBC on Wednesday.

But 2022 “is a little bit more tricky,” he said. Things could improve in the second half of the year as more supplies come online, but the first six months could still see pockets of shortage across the industry, Hariharan explained.

“There is capacity coming online, not just from the foundry companies, but also from the [integrated device manufacturer] companies. All the U.S. and European IDMs are also expanding their capacity — a lot of it is slated to come online from the middle of next year onwards,” he added.

ADVERTISEMENTSCROLL TO CONTINUE WITH CONTENT
WATCH NOW
VIDEO22:41
The global chip shortage will probably hit your everyday life
Foundries are companies that are contracted by semiconductor firms to build chips. IDMs, on the other hand, are companies that design, manufacture and sell those chips.

JPMorgan is recommending that investors start pursuing longer-term trends in the semiconductor space that are more structural than cyclical, Hariharan told CNBC.

Structural trends tend to be longer-term, permanent changes in an industry whereas cyclical trends are influenced by the business cycle and typically return to the initial starting point after a few years.

There are two trends that the investment bank is “really positive on over the next three to five years,” he said.

The first is the very high-end compute segments, according to Hariharan. There’s ongoing disruption in high-end computing globally, which used to be very monolithic but is now being fragmented as more companies enter the space.

“There is a lot of fragmentation of that space happening — and that is definitely leading to faster growth,” Hariharan said. “So that is a space, I think, we are expecting it to grow maybe double digit — 15% to 20% — over the next three to five years.”

The second trend JPMorgan is positive on is Chinese semiconductor companies that focus on legacy, long-tail technologies. These companies manufacture a variety of less advanced chips in areas like power management, microcontrollers, sensors and other consumer-related segments.

“We are seeing that more and more companies are coming up in China aiming to target some of these longtail technologies,” Hariharan said.

“The local demand is clearly there. Most of these companies only have maybe 5% to 10% of the local demand served at this point in time. So the potential addressable market is maybe 5 to 10 [times] of what they’re currently serving,” he added.

How Asian semiconductors are doing

Chip manufacturing amid a global supply shortage is an attractive proposition for companies.

For example, the Taiwan Semiconductor Manufacturing Company is reportedly raising prices by 10% for advanced chips, while less advanced chips — used commonly by automakers — would cost 20% more. TSMC is the world’s largest contract manufacturer for semiconductor chips.

But their fortunes in the stock market have been mixed.

WATCH NOW
VIDEO01:01
Tech investor Paul Meeks expects chip shortage to last deep into 2023
While the likes of TSMC, MediaTek, UMC and Renesas Electronics are up between 16% and 45% so far this year, shares of Samsung Electronics — the world’s largest chipmaker by revenue — and SK Hynix are down 13% and 6%, respectively, in the same period.

Hariharan explained that memory chips make up a sizeable component of Asia’s semiconductor industry and that memory prices have been coming down since early October.

“The market has been anticipating bit of a downturn in that space, so, that is kind of going through a down cycle,” he said. “The other part, I would say, is that the market has also been a little bit worried about when the cycle is going to peak.”

Samsung and SK Hynix are both memory chipmakers.

Batteries are the ‘new oil’ says Morgan Stanley — Here are stocks for every part of the supply chain
Fundstrat’s Tom Lee expects a ‘buyable dip’ in stocks before December rally
Investors are usually unwilling to pay up if they worry about whether a company can beat earnings expectations in future quarters, Hariharan explained.

He said JPMorgan expects a relatively short downturn in the memory cycle as industry dynamics have improved compared with past downcycles that lasted longer.