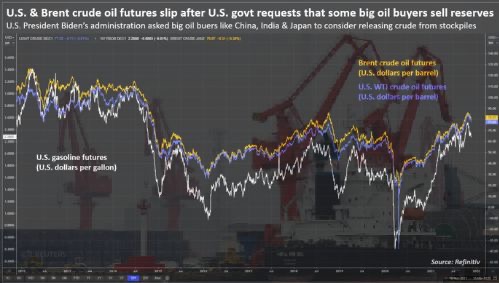 China says it intends to release some reserves

SINGAPORE/WASHINGTON, Nov 18 (Reuters) – Governments from some of the world’s biggest economies said on Thursday they were looking into releasing oil from their strategic reserves, following a rare request from the United States for a coordinated move to cool global energy prices and ahead of a meeting of major oil producing countries.

The Biden administration has asked big oil buyers such as India and Japan – as well as China for the first time – to consider releasing stocks of crude, several people familiar with the requests told Reuters on Wednesday.

Report ad
As the world economy rebounds from the pandemic, Washington is frustrated that producers in OPEC+, the Organization of the Petroleum Exporting Countries and allies such as Russia, have rebuffed U.S. requests to speed up oil supplies. With gasoline prices and other costs rising, U.S. President Joe Biden also faces political pressure ahead of midterm elections next year.

OPEC+ plans to meet on Dec. 2. The group has taken a deliberate approach to boosting output, viewing the economic recovery as too fragile to justify more supply.

Oil prices sank about 4% to a six-week low after Reuters reports about the U.S. request and China’s decision to release some crude, before recovering some ground later on Thursday. Oil prices have retreated from recent highs in anticipation that world supply will rise.

“Brent is now under 80 bucks,” said John Driscoll, managing director at consultancy JTD Energy in Singapore. “It’s having a short-term effect on oil markets. It’s probably good for at least a 5% correction.”

China’s state reserve bureau told Reuters it was working on a release of crude oil reserves, but declined to comment on the U.S. request.

The United States has the largest strategic reserve at more than 600 million barrels. The U.S. SPR was set up in the 1970s after the Arab Oil Embargo to ensure the nation had adequate supply to weather an emergency. In the last several years, the shale boom has pushed U.S. output to rival that of Saudi Arabia and Russia.

A CHALLENGE TO OPEC

By involving China for the first time, this proposal is an unprecedented challenge to OPEC, the cartel that has influenced oil prices for over five decades. China is the world’s No. 2 oil consumer and largest importer.

There was no immediate official reaction from OPEC+ members.The group has been raising output by 400,000 barrels per day per month, gradually unwinding record production cuts made in 2020 when the pandemic sank fuel demand.

One OPEC source who asked not to be named said it would be surprising to see consuming countries release stocks to lower prices rather than to meet a supply shortage.

However, several large world energy consumers have been pressing OPEC to boost supply. China elected to release reserves in September to try to stabilize prices. India has expressed frustration for months, and sharply cut purchases from Saudi Arabia in the spring due to rising costs. read more

“Somebody may turn around and say, ‘Well, if I’m a producing country, why don’t I take advantage of high prices?’ Well, you can. It’s your choice – you’re a sovereign country, you’re a member of a cartel,” Hardeep Singh Puri, India’s oil minister, told a conference in Dubai on Wednesday. “This is not a case of supplies not being available. There are 5 million barrels a day of supplies available which have not been released for whatever reason.”

CHINA IN, IEA OUT?

The United States and its allies have coordinated strategic petroleum reserve releases before, such as in 2011 when supplies were hit by a war in OPEC member Libya. That coordination has been handled through the Paris-based energy watchdog the International Energy Agency, whose membership includes the United States, Japan and numerous European nations.

The United States, however, did not ask the European Union for its participation, according to a source familiar with discussions, saying Europe’s primary problem has been related to higher natural gas prices.

The IEA, on its web site, said such releases are not meant for price intervention. Both Japan and South Korea were contacted by the United States, and both said they do not release reserves simply to deal with rising prices.

If China is doing its release in coordination with other nations, it would be the first such time, said Sengyick Tee, analyst at Beijing-based consultancy SIA Energy.