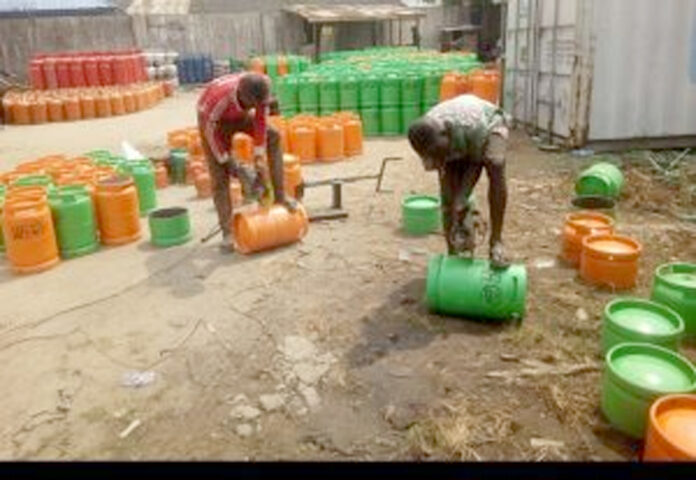 Investigations also show that the cost of the product increased by 240 per cent for 12.5kg, jumping from N3,000 to N10,200 between January and October.

About 65 per cent of LPG is imported into Nigeria, while domestic production accounts for 35 per cent, hence the halt in imports could further shoot up cooking gas price if the situation is not addressed.

The Executive Secretary, Nigerian Association of Liquefied Petroleum Gas Marketers, Bassey Essien, told our correspondent on Monday that the reintroduction of customs duty and Value Added Tax on imported LPG were the basic reasons for the halt in its imports by importers.

×
He stated that there were several other issues and stressed that if the halt in LPG imports should drag further, the supply of the commodity domestically could suffer severe drop.

This came as NALPGAM in an open letter to the Minister of State for Petroleum Resources, Chief Timipre Sylva, urged the minister to urgently intervene in the skyrocketing price of LPG in Nigeria.

The open letter was signed by the National President, NALPGAM, Olatunbosun Oladapo, and Essien. NALPGAM is the umbrella body of operators of LPG bottling plants licensed by the statutorily empowered government agencies to carry out the business of safe bottling of cooking gas.

Essien stated that due to the fears expressed by importers who had stopped importation of LPG into the country, cooking gas sourced from the Nigeria Liquefied Natural Gas company was now selling in the region of N11m per 20 metric tonnes truck.

This, he said, was with a cumulative daily increase of N300,000 to N500,000 per 20MT truck without the imposition of VAT and customs duties.

Providing further explanation on this, Essien said, “The NLNG supplies LPG to the terminals and these terminals sell to the marketers and at times in a day, the price can go up by about three times.

“Take for example, I was granting an interview on Saturday morning on this same issue and that morning some terminals were selling for N11.6m to N11.7m, but as I stepped out of the interview, it had increased to N12m.

“And the annoying part is that since about a week or two now, nobody has been importing gas because of the issues with customs and VAT. And this is because since the position on these issues have not been clearly stated, importers have to pause.”

He added, “The customs is even clamping down on importers and so they cannot import anything, which means that the product in circulation across the country is from the NLNG.

“But when there are issues like this, some unscrupulous people will want to capitalise on the situation, which they are doing, because right now, from what we’ve got, the price at which NLNG product gets to Lagos is about N7m, but you get it at N11m and above.”

On the price increase, the association stated that despite the decade of gas policy and measures by government, the cost of cooking gas had continued to rise.

It said, “Despite the strategies employed by the government with its anticipated benefits, the reverse seems to be the case with the bulk of LPG consumed in the country largely imported.

“The availability of the product for domestic consumption has been skewed majorly to 65 per cent import dependence while only 35 per cent has been attributed to local supply.

“The obvious devaluation of the local currency, inability to access foreign exchange by importers, the increasing international price against which the cost of domestic LPG is indexed as well as the anticipated re-imposition of VAT and customs duties with retrospective application have all contrived to push the price of LPG upward.”

“The daily galloping price of gas if not properly handled may derail the lofty ideals of the gas expansion plans of the government as well as the job opportunities the programmes were intended to create.”

The association stated that the price of LPG had exponentially skyrocketed over the last few months.

Officials at the Federal Ministry of Petroleum Resources and the Nigerian National Petroleum Company Limited promised to revert when contacted.

Sylva had in August this year described LPG as a deregulated product and stated that government could not determine its price, but promised to meet with marketers on concerns about the persistent price hike.